Is Silver Poised for a Rally? ETFs in Focus

The withdrawal of the healthcare bill on Friday, March 24, 2017 raised investors’ concerns on whether President Trump will be able to fulfill his other promises of tax cuts and deregulation. This resulted to uncertainty this past week. However, markets have since then pared the previous losses, with the consumer confidence reaching a 16-year high. During periods of high uncertainty in the equity markets, demand for safe haven assets pick up (read: Why Investors are Bailing Out of US Stock ETFs).

Silver is up 13.5% so far this year. It is not just a precious metal but also has industrial use. It is used in wiring for cell phones, solar cells and chemical reagents. With increased demand for solar cells and a move toward alternative energy, owing to the threat of climate change, demand for silver can peak. However, silver is a rare metal, as most of it comes as a byproduct of other metals.

The expected increase in demand for the metal can only be fulfilled if there is adequate supply. This can lead to an increase in the price of the metal. Though investors are worried about the impact of rate hikes on the price of the white metal, the fact that silver prices surged 2.6% when the interest rates were hiked in March is a positive. This may be partly due to the fact that Wall Street had already factored in three rate hikes this year. When the Fed chair signaled a less hawkish tone, indicating two more rate hikes in the year, it led to a surge in silver prices (read: See How ETFs React When Hawks Act Like Doves).

All in all, the case for silver investing remains strong. Let’s look at the popular silver ETFs now:

This is one of the most popular funds in the space offering exposure to the metal.

This is another fund offering exposure to silver and is one of the cheaper options. 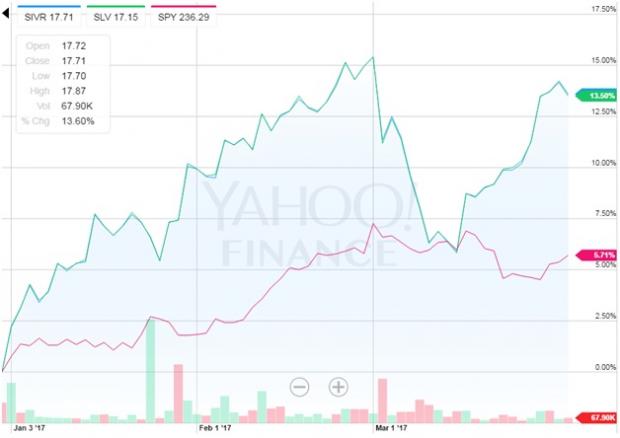 Hence, it is evident from the chart that the two ETFs considered have mostly moved in tandem, up in the range of 13.5%-13.6% in the year-to-date time frame. Comparatively, the most popular equity ETF SPY has gained 5.7% so far this year. Therefore, we believe the scenario for silver investing is bullish currently and prices are trending higher (read: Best and Worst Zones of Q1 and Their ETFs).