Why You Should Avoid Fred's Inc. (FRED) Stock for Now

Discount retailer Fred’s Inc. has recently slipped to the red. The shares of the company have declined 16% in the past one year, wider than the Zacks categorized Retail-Discount industry’s decline of 4%. Further, the chances of a rebound of this Zacks Rank #5 (Strong Sell) stock seem minimal as the industry occupies a space in the bottom 18% of the Zacks classified industries. 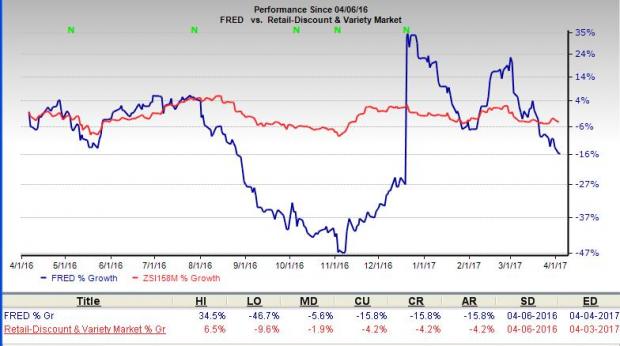 What pulling the Stock Down?

The industry-wide weakness can be attributed to the fact that retail companies are grappling with declining footfall. Fred’s is no exception to this trend. The company witnessed massive downward revision in estimates in the past 60 days as It is facing difficult times with respect to comps mainly due to declining traffic at stores. The company’s traffic trends have remained sluggish in the past few quarters. In fact, its comps declined 3.4%, 4.8% and 4% in December, January and February, respectively. The fact that traffic declined despite Fred’s initiatives to boost sales remains a major concern.

The company has also been reporting soft sales in the front-store categories. Sales are consistently impacted by several factors, including some temporary challenges related to switch to a third-party distributor, reductions in snap payments and warmer than expected weather.

Further, the company relies too much on the pharmacy sector. Though it is trying to boost the pharmacy category, in the near term the segment is not performing well. Fred’s has entered into an agreement with Rite Aid Corporation (RAD - Free Report) and Walgreen Corporation (WBA - Free Report) to more than double its pharmacy stores across the U.S. in a bid to expand presence in the sector. However, the pharmacy sector has also been underperforming lately mainly due to shift to 90-day prescriptions and the slowdown of specialty pharmacy.

Further, the company has not performed up to the mark recently. Fred’s has reported negative surprise twice in the trailing four quarters with an average surprise of negative 4.2%.

A better-ranked stock in the same sector is Burlington Stores Inc. (BURL - Free Report) . Burlington Stores sports a Zacks Rank #1 (Strong Buy) and has an expected earnings growth rate of 15.9%. You can see the complete list of today’s Zacks #1 Rank stocks here.