Penske Automotive Group, Inc. PAG recorded earnings of 97 cents per share in the first quarter of 2017, on par with the Zacks Consensus Estimate.

Revenues rose 5.3% to $5.1 billion, surpassing the Zacks Consensus Estimate of $4.8 billion. Excluding foreign exchange, revenues increased 11.3%, driven by the 11.6% rise in total retail automotive sales to 124,472 units.The increase in automotive sales was driven by the strength in the company's U.K. operations and acquisitions.

Revenues from Retail Automotive inched up to $4.8 billion from the year-ago figure of $4.5 billion.

Revenues from Retail Commercial Trucks increased to $211.7 million from $206.7 million recorded in the year-ago quarter.

Revenues from Commercial Vehicles Australia/Power Systems and Other increased to $113 million from $103 million in the year-ago quarter.

During the last three months, the company completed acquisitions that are estimated to generate roughly $900 million in annualized revenue.

In Apr 2017, the company completed the acquisition of Schumacher European, Ltd., a Mercedes-Benz and Sprinter dealership with 67 service bays located in Phoenix, AZ. The acquisition is expected to add roughly $250 million in annualized revenue. 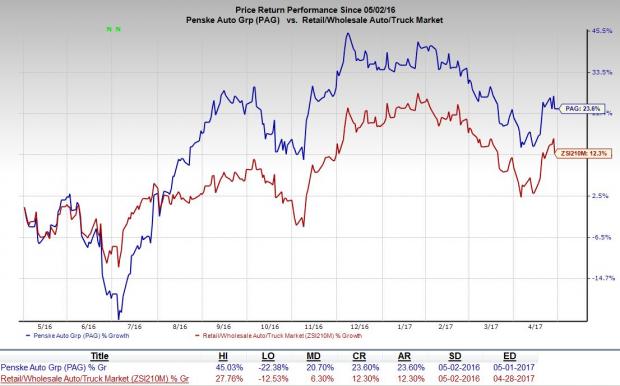 Now. Just released, today's 220 Zacks Rank #5 Strong Sells demand urgent attention. If any are lurking in your portfolio or Watch List, they should be removed immediately. These are sinister companies because many appear to be sound investments. However, from 1988 through 2016, stocks from our Strong Sell list have actually performed 6X worse than the S&P 500. See today's Zacks "Strong Sells" absolutely free >>