Earnings (excluding stock-based compensation) soared 77.3% to 39 cents in the reported quarter. The results benefited from the signing of a perpetual license contract worth $7 million as well as from higher services revenues and improving margins.

Revenues surged 24.8% from the year-ago quarter to $223.2 million much better than the Zacks Consensus Estimate of $204 million. Recurring revenue, which includes maintenance, cloud and term license, was 55.3% of total revenue as compared with 64.7% in the year-ago quarter.

Following the results, shares increased 10.41% to close at $52.50 on May 11. We note that Pegasystems has outperformed the Zacks Computer Software industry on a year-to-date basis. While the stock gained almost 46%, the industry witnessed an advance of roughly 16.3%. 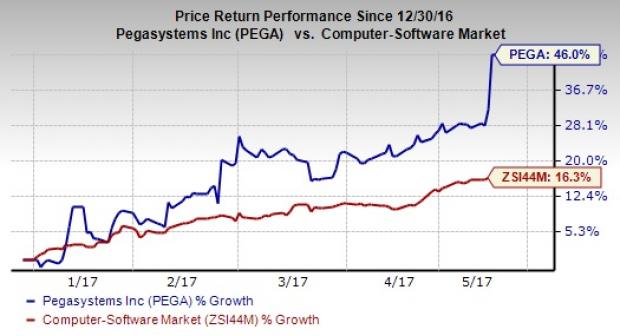 Geographically, the Americas (including the U.S., Canada and Latin America), produced 65% of total revenue. Non-Americas (international) generated the remaining 35%. Approximately 14% of the company’s total revenue came from the U.K.

Total license (term and perpetual) and cloud backlog increased 32% from the year-ago quarter to $513.1 million. This is significantly positive as we note that the company didn’t have any Whales – customers with license and cloud commitment of greater than $10 million – in the quarter.

We note that adoption for Pegasystems solutions continues to improve in the domestic as well as international markets. As noted by the company, Australia-based cable company Foxtel selected Pega Sales and Pega Marketing products over salesforce.com (CRM - Free Report) , which has significant presence in the country.

The company’s solutions were chosen by the likes of Bank Mandir – Indonesia's largest bank and a large P&C insurance company in Japan during the quarter.

Just released, today's 220 Zacks Rank #5 Strong Sells demand urgent attention. If any are lurking in your portfolio or Watch List, they should be removed immediately. These are sinister companies because many appear to be sound investments. However, from 1988 through 2016, stocks from our Strong Sell list have actually performed 6X worse than the S&P 500. See today's Zacks "Strong Sells" absolutely free >>.