Alibaba Group Holding Limited (BABA - Free Report) has been blazing fast in attracting small businesses at its Gateway '17 confab in Detroit that ended on Jun 21. The announcement of Alibaba’s strategic partnership with Driscoll’s and Chicken of the Sea came straightway from the confab.

Per the deals, Driscoll’s will sell strawberries while Chicken of the Sea will sell seafood in China via Alibaba’s Tmall platform.

According to Jet Jing, Vice President of Alibaba Group, "These mutually beneficial partnerships will allow Alibaba to diversify the options available to consumers on our platforms, and we can help both Driscoll’s and Chicken of the Sea to successfully build their brand and presence in China."

Alibaba has already developed partnerships and services to ensure that U.S. producers, wholesalers and associations export fresh and prepared foods to China effortlessly. The company’s logistics affiliate Cainiao Network facilitates same day and next day delivery in more than 1,100 counties and districts in China.

During the conference, the company pointed toward a win-win situation for U.S. merchants and Chinese consumers. Co-founder and vice chairman Joe Tsai stated that growing demand for high quality consumption allows American businesses to play a major role in China.

According to Produce Report, 36 million households in China made online purchase of fresh products in 2016 and that figure is expected to increase two times by 2020. It appears that Alibaba is set to pave the way for U.S. sellers to extend their reach in China.

Alibaba’s increasing focus on U.S. sellers appears to be a strategic move to counter tough competition from established players such as Amazon AMZN, eBay EBAY and JD.com JD in the U.S.

The strategy behind attracting small businesses is part of the company’s efforts to tap the relatively untapped portions of the retail market. Unlike big brands, small businesses cater to niche markets and tapping them help Alibaba bring these markets into its fold.

China is currently the world’s largest retail market followed by the U.S. According to eMarketer, the Chinese retail market offers a $4.89 trillion opportunity compared with the U.S.’ $4.52 trillion. So, it seems that by trying to connect U.S. sellers with Chinese buyers, the company is trying to grab the lion’s share of the global retail market.

Alibaba is looking quite confident about its success in the U.S. going forward. This could probably be the reason behind the company’s upbeat revenue guidance for fiscal 2018 that it offered at its investor day in Hangzhou.

It expects staggering revenue growth of 45–49% in the current fiscal, or revenues of around $34.3 billion, far above analysts’ estimates. The company is bullish on the revenue growth and so are investors, given its solid expansion in e-commerce, cloud computing, and strong media and entertainment businesses.

Investors will keep an eye on how Alibaba’s efforts with respect to U.S. small businesses impact its share price that has appreciated a massive 82% over the last one year compared with the Zacks Electronic Commerce industry’s gain of 54.8%. 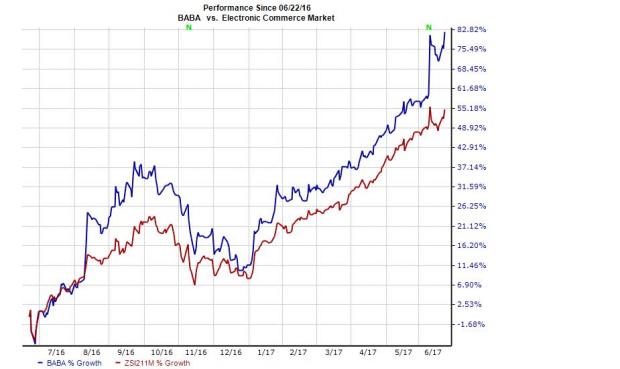 If Alibaba could repeat its domestic success internationally, especially in the U.S., investors can expect accelerated growth.

Today's investment ideas are short-term, directly based on our proven 1 to 3 month indicator. In addition, I invite you to consider our long-term opportunities. These rare trades look to start fast with strong Zacks Ranks, but carry through with double and triple-digit profit potential. Starting now, you can look inside our home run, value, and stocks under $10 portfolios, plus more.

Click here for a peek at this private information >>

Staples Gains 5% on Talks of Buyout by Sycamore Partners