Novartis Eye Drug Hits Endpoints; CANTOS Data Impresses: Novartis’ experimental eye drug, RTH528, was found to be non-inferior to Regeneron’s blockbuster drug Eylea (aflibercept) in a couple of late-stage studies. Adverse event rates were also comparable. The studies were conducted in patients with neovascular age-related macular degeneration (nAMD). Novartis expects to file for approval next year. If approved, RTH528 could have a competitive edge due to a less frequent dosing regimen.

Novartis also impressed with data from a late-stage study (CANTOS) on ACZ885 (canakinumab). Top-line data showed that ACZ885 plus standard of care therapy reduces cardiovascular risk in people with a prior heart attack and inflammatory atherosclerosis. Novartis intends to start discussions with regulatory authorities.

So far in 2017, Novartis has outperformed the Zacks categorized Large Cap Pharmaceuticals industry with shares gaining 18.5% while the industry is up 13.2%.

Subcutaneous Rituxan Formulation Approved: A subcutaneous formulation of Roche’s RHHBY multi-billion dollar drug, Rituxan, gained FDA approval this week. Approval was largely expected considering an FDA advisory panel had voted unanimously in favor of approving the formulation for certain types of blood cancer. Formulated using rHuPH20, a technology licensed from Halozyme, Rituxan Hycela can be administered in five to seven minutes compared to an hour and a half or more for the intravenous formulation.

FDA Green Light for Shire ADHD Drug: Shire’s SHPG ADHD drug, Mydayis, has finally gained FDA approval. Mydayis or SHP465, as it was previously referred to, has had a long journey with the FDA initially giving an approvable letter way back in May 2007. At that time, the agency had asked for additional studies. Shire, a key player in the ADHD market, expects to launch the long-lasting once-daily treatment in the third quarter of 2017. The ADHD market is huge though highly genericized. About 10.5 million adults in the U.S. are estimated to have ADHD (Read more: Shire's ADHD Drug Mydayis Receives Approval in U.S.).

Neos ADHD Drug Too Gets FDA Nod: Shire was not the only company to gain FDA approval for an ADHD drug this week. The FDA also gave its nod to Neos’ NEOS Cotempla XR-ODT, making it the first and only methylphenidate extended-release orally disintegrating tablet to be approved for the treatment of ADHD in patients 6 to 17 years old.

With this approval, Neos has both a branded methylphenidate as well as a branded amphetamine product available in an extended-release orally disintegrating tablet dosage form. Cotempla XR-ODT will be launched this Fall.

The NYSE ARCA Pharmaceutical Index was up almost 4% over the last five trading sessions with the sector reacting favorably to rumors that steps taken by the Trump administration to drive down drug prices will not be as draconian as previously expected. Among major stocks, Bristol-Myers BMY was up 5.6% while Merck MRK gained 4.5%. Over the last six months, AstraZeneca was up 30.1% while Bristol-Myers was down 2.4% (See the last pharma stock roundup here: J&J, Lilly Present Data, Merck Keytruda Study Enrolment Paused). 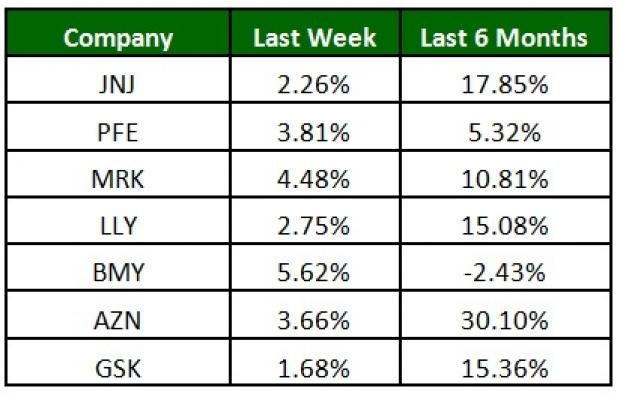 The Best & Worst of Zacks

Today you are invited to download the full, up-to-the-minute list of 220 Zacks Rank #1 "Strong Buys" free of charge. From 1988 through 2015 this list has averaged a stellar gain of +25% per year. Plus, you may download 220 Zacks Rank #5 "Strong Sells." Even though this list holds many stocks that seem to be solid, it has historically performed 6X worse than the market. See these critical buys and sells free >>