Is Chicago the New Silicon Valley? Rahm Emanuel Thinks So

Speaking at Techweek Chicago’s latest “Growth Summit” on Thursday, Chicago Mayor Rahm Emanuel described a side of the Windy City that non-residents might not be familiar with—a growing hotbed of innovation in the tech industry.

While the tech giants still seem firmly planted on the West Coast, a search for talent and inspiration has allowed some of the country’s most exciting startups to blossom in places like Chicago, a city whose culture is rich but not historically tech-centric. Sprinkle in some investment from an interested administration like Emanuel’s, and it’s not impossible to imagine Chicago becoming the “new” Silicon Valley. 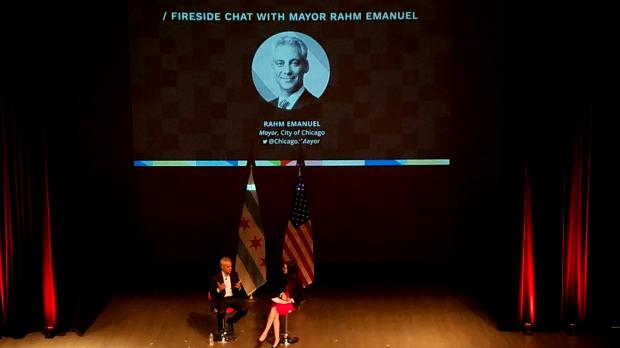 The mayor will be the first person to explain this to you, and at Techweek, Emanuel used his time to cite as much evidence as possible that Chicago is now a serious tech player. For one, Emanuel pointed out that the city has rapidly expanded its network of “innovation centers” over the past few years.

Indeed, Chicago has gone from having zero of these innovation-focused organizations to having over 100 in just five years. Examples include MATTER, an incubator for healthcare entrepreneurs and medical technology, and Current, a program that pledges to leverage technology to build out new water infrastructure.

Emanuel also cited the city’s enormous pool of young talent. Sure, one would expect there to be plenty of great employees in a metropolitan population of nearly 10 million, but Chicago has some unique advantages.

Located directly on the shores of Lake Michigan, Chicago has a vibrant food and music culture, which Emanuel said he uses to convince tech people to move to the city. In fact, in a passionate plea to the entrepreneurs in the room, the mayor asked hiring managers to flex Chicago’s summer music scene—which includes world-renowned music festivals like Lollapalooza—as a tool to attract young talent.

Also, Chicago is second only to Boston in number of colleges and universities within its city limits. With 16 of these schools constantly churning out graduates, the city’s talent pool is always fresh. Emanuel would also mention that he believes the University of Chicago to be “probably the best program in the country” for data mining and research.

The mayor offered a recent anecdote as an example here. PayPal (PYPL - Free Report) , which was founded not too far away by University of Illinois graduates, acquired Chicago-based Braintree in 2015—and it wants to keep the company right where it is.

“Take a look at the narrative of PayPal—created here in the state of Illinois, but to make it they had to move to the West Coast,” Emanuel said. “Ten years later, they just bought Braintree and they want to keep it here.”

Emanuel was also optimistic about specific emerging tech markets. For example, he promised the Techweek crowd that Chicago would be considered a world leader in cybersecurity in just four years. “It’s a growing field, and we’re going to make Chicago the capital,” he said.

Of course, Emanuel has not been immune to criticism, both in his own city and from the nation as a whole. Recently, the polarizing mayor has publicly clashed with President Donald Trump, who used the city’s rising murder rate as an example of failed policy. Within Chicago, the Emanuel administration has been ridiculed for its school funding choices and support of a controversy-ridden police department.

Nevertheless, Emanuel remains an incredible spokesperson for the city of Broad Shoulders, and his passion for Chicago is evident in his belief that its community is special enough to support the next generation of tech innovators:

“Chicago has a community. You fail in New York—basta, you’re dead. You fail here, and there’s a whole community to pick you back up.”

The Best & Worst of Zacks

Today you are invited to download the full, up-to-the-minute list of 220 Zacks Rank #1 "Strong Buys" free of charge. From 1988 through 2015 this list has averaged a stellar gain of +25% per year. Plus, you may download 220 Zacks Rank #5 "Strong Sells." Even though this list holds many stocks that seem to be solid, it has historically performed 6X worse than the market. See these critical buys and sells free >>