Western Digital updated its fiscal fourth-quarter outlook to reflect better-than-expected demand for its storage products (flash-based storage devices) and a favorable performance. The company is expected to report its fourth-quarter 2017 results on July 27.

The company maintained its fourth-quarter revenues to be approximately $4.8 billion, unchanged from the previous guidance. The Zacks Consensus Estimate for the quarter stands at $4.8 billion.

Also, Western Digital forecasts non-GAAP earnings to be approximately $2.85 per share, higher than the prior projection of $2.55 to $2.65. The Zacks Consensus Estimate is currently pegged at $2.36 per share.

The company projected non-GAAP gross margin of approximately 41%, whic is higher than the previous projection of 40% and backed by consistent favorable pricing and product mix across the company’s businesses.

The company also reiterated its previous non-GAAP EPS of approximately $12 for the calendar year 2017.

The upbeat earnings outlook for the fiscal fourth quarter boosted investor confidence to a large extent.

We note that Western Digital’s shares have outperformed the Zacks categorized Computer Storage Devices industry in the past one-year. While shares gained 101.3%, the industry advanced 84.8% in the same period. 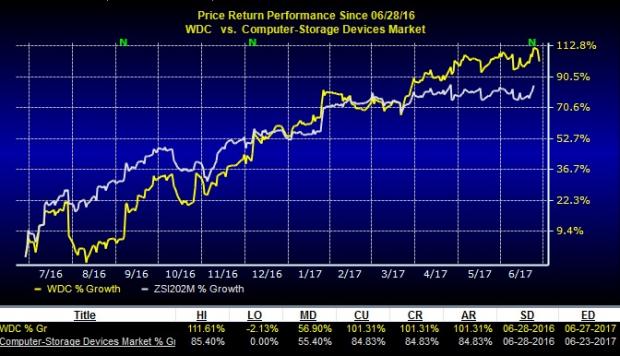 The company witnessed strong demand for hard drive and NAND-based products from all categories of customers, largely driven by cloud and mobility based applications, as well as strong PC demand in the reported quarter.

Western Digital continues to benefit from ongoing shift toward non-PC applications, secular growth of digital data and growing exposure to the small and medium business space.

Additionally, higher demand for storage is expected to lead to a positive earnings surprise in the ongoing quarter. Moreover, we are encouraged by the company’s launch of a string of storage devices under the mobile and cloud segment.

Further, the company’s entry into the wireless devices market comes at a time when storage services related to smartphones and tablets are witnessing large-scale adoption. These factors are anticipated to be growth catalysts, going forward. Moreover, the SanDisk acquisition not only expands Western Digital’s offerings in the SSD segment, but also provides a competitive edge against peers such as Seagate Technology (STX - Free Report) .

Applied Optoelectronics AAOI and Applied Materials, Inc. AMAT sporting the same Zacks Rank are some other stocks worth watching in the broader sector.

Applied Optoelectronics and Applied Materials have a long-tern expected EPS growth rate of 20% and 16.58%, respectively.

Just released, today's 220 Zacks Rank #5 Strong Sells demand urgent attention. If any are lurking in your portfolio or Watch List, they should be removed immediately. These sinister companies because many appear to be sound investments. However, from 1988 through 2016, stocks from our Strong Sell list have actually performed 6X worse than the S&P 500.