Dow Chemical (DOW - Free Report) and DuPont (DD - Free Report) have provided an update on the status of their proposed $130 billion mega-merger. The companies noted that their boards have reaffirmed their support for the merger and have jointly commenced a comprehensive portfolio review aimed at capturing material value-enhancing opportunities.

The boards have also engaged McKinsey & Co. to assist the companies in the review process. Moreover, the lead independent directors of Dow and DuPont are working together to oversee the review. The board of the combined company is expected to assess the results of this review after the completion of the merger transaction.

Dow and Dupont recently secured clearance from Canada's Competition Bureau for the planned merger after they agreed to sell certain assets and businesses. Earlier this month, the companies received the U.S. antitrust approval for the merger. The companies, last month, also secured conditional regulatory approval in China and Brazil for the merger. Moreover, the European Commission conditionally approved the merger in Mar 2017.

Dow and DuPont continue to expect the closing of the merger to take place in Aug 2017. Following the completion of the merger, the combined entity would eventually break up into three independent companies through tax-free spin-offs. The breakup is still expected to take place within 18 months after the completion of the deal. The merger is projected to deliver cost synergies of around $3 billion and growth synergies of roughly $1 billion.

Dow Chemical has outperformed the Zacks categorized Chemicals-Diversified industry over a year. The company’s shares have rallied 27.2% over this period, compared with roughly 21.6% gain recorded by the industry. 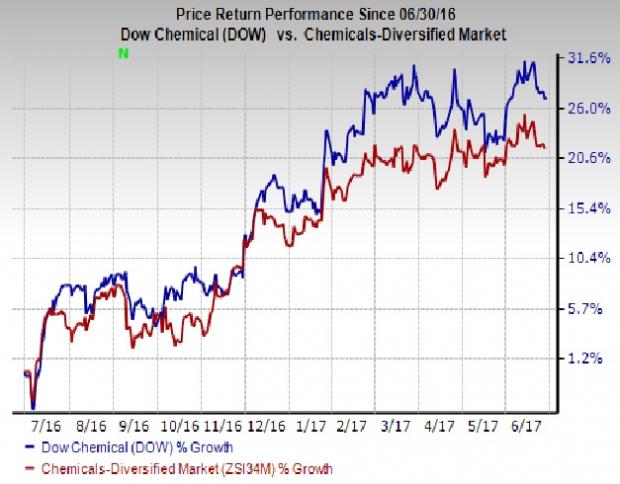 Dow is gaining from its cost-cutting and productivity actions and continued focus on consumer-driven markets. The company is seeing strong demand across major consumer-focused markets such as packaging, infrastructure, transportation and consumer care, which is contributing to volume and earnings growth.

The company is witnessing signs of positive economic momentum globally amid sustained geopolitical risks and volatility. Dow believes that the strength of its portfolio coupled with its focus on consumer-led markets will continue to serve it well in this backdrop.

Some better-ranked companies in the chemical space include The Chemours Company (CC - Free Report) and Kronos Worldwide, Inc. (KRO - Free Report) , both sporting a Zacks Rank #1 (Strong Buy). You can see the complete list of today’s Zacks #1 Rank stocks here.

Chemours has an expected long-term earnings growth of 15.5%.

Kronos has an expected earnings growth of 354.8% for the current year.

Today's Stocks from Zacks' Hottest Strategies
It's hard to believe, even for us at Zacks. But while the market gained +18.8% from 2016 - Q1 2017, our top stock-picking screens have returned +157.0%, +128.0%, +97.8%, +94.7%, and +90.2% respectively. And this outperformance has not just been a recent phenomenon. Over the years it has been remarkably consistent. From 2000 - Q1 2017, the composite yearly average gain for these strategies has beaten the market more than 11X over. Maybe even more remarkable is the fact that we're willing to share their latest stocks with you without cost or obligation. See Them Free>>