The contract is valued at $130.3 million. Per the terms, Lockheed Martin will produce the PATRIOT Advanced Capability-3 (PAC-3) Missile for fiscal 2017 with an intention to expand the total missile segment enhancement quantity by 35. In addition, the company will provide 130 launcher modification kits with motor control units to the U.S.; parts library and missile segment enhancement storage and aging requirements to the U.S.; and cost and software data reporting requirement to the U.S. At the same time, it will reduce the missile round trainer quantity by 30 and the empty round trainer quantity by 36 for Qatar.

Lockheed Martin will utilize fiscal 2015, 2016 and 2017 other and other procurement (Army) funds to complete the work by Jun 30, 2020. Work related to the modification deal will be carried out at Grand Prairie, Lufkin, El Paso, TX; Camden, AZ; Chelmsford, MA; Ocala, FL Huntsville, AL; Huntingdon Beach, CA.

A Brief Note on PAC-3

PAC-3 is the most advanced, capable and powerful terminal air-defense missile that can accost tactical ballistic missiles, cruise missiles and aircraft. It is a high-velocity interceptor that counters incoming targets by direct body-to-body impact. The PAC-3 missile uses a solid propellant rocket motor, aerodynamic controls, altitude control motors and inertial guidance to navigate.

These missiles are currently used by six countries like the U.S., Germany, Japan, the Netherlands, the United Arab Emirates and Taiwan. Apart from the countries listed under the latest deal, the company also has a contract with Kuwait.

Lockheed Martin manufactures combat-proven PAC-3 missiles under production deals from the U.S. Army, Air and Missile Defense Program. This enables the company to enjoy a steady stream of contracts.

Meanwhile, the Trump administration put forward the fiscal 2017 budget appropriation in March to expand the nation’s defense fund, citing that years of declining funding levels in the Army's investment and modernization accounts has hampered readiness of the U.S. forces. Notably, the appropriation request included enhanced funding for upgrading Missile defense system of the country.

Also, everyone is aware of the continuous missile brawl between North Korea and the U.S that has been taking place for the last few months. All these development, in turn, are bound to boost the demand for today’s A-one missiles such as that of Lockheed Martin’s PAC-3. Consequently, allowing the company to benefit in the near term.

Furthermore, Lockheed Martin plans to increase its international mix from 21% in 2016 to 30% of total sales in the upcoming years, owing to robust demand witness overseas for its programs. Latest contracts like the aforementioned ones are expected to uplift the company's international business, substantially. It may also attract more such contracts in the future, since PAC-3 is one of the top priorities in the Pentagon's missile system.

Lockheed Martin’s stock has rallied 12.4% in the last one year, underperforming the Zacks categorized Aerospace/Defense industry’s gain of 27.6%. This could be because the earlier budget cuts have put pressure on the top line, although the present defense budget is more in favor of the sector. Moreover, we believe that budget deficits and political uncertainty might make future defense budgets vulnerable to cutbacks. The company faces tough competition from other defense giants like The Boeing Company (BA - Free Report) , General Dynamics Corp. (GD - Free Report) and Northrop Grumman Corp. (NOC - Free Report) . 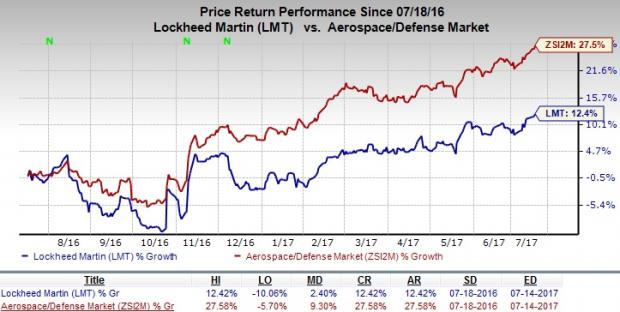 Here's Why Investors Should Invest in Bruker (BRKR) Now