Share price of Microsoft Corporation (MSFT - Free Report) rallied to a new 52-week high of $74.96, eventually closing a tad bit lower at $74.77 on Aug 31. The momentum can be attributed to the recently announced collaboration between the company’s Cortana and Amazon.com Inc.'s (AMZN - Free Report) Alexa.

Moreover, strong Office 365 and Windows 10 adoption as well as robust performance from Azure are helping the stock to gain momentum as evident from the last quarter’s earnings report. While Office 365 commercial revenues grew 44% at constant currency, Azure revenues soared 98% on a year-over-year basis.

We also note that Microsoft's upcoming console, Xbox One X, has significant growth potential, as evident from the record pre orders.

Notably, the stock has returned 26.7% year to date, in line with the industry it belongs to. The stock has a market cap of $559.88 billion. 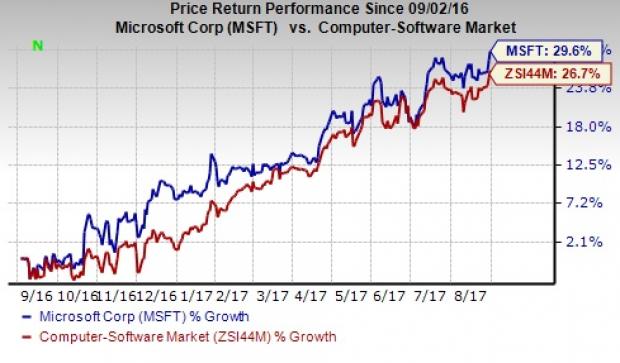 We believe that the collaboration between Cortana and Alexa will boost Microsoft’s growth potential in the Artificial Intelligence (AI) market. Currently, Alexa is dominating the digital assistant market as Amazon’s Echo speaker is expected to have 70.6% of voice-activated assistant users in 2017, per eMarketer’s latest data.

Microsoft claims that there are 145 million active monthly users of Cortana through Windows 10.

Moreover, continuing robust adoption of Azure will drive Microsoft’s top-line growth. According to data from Synergy Research, Azure trailed only Amazon Web Services in the cloud infrastructure services market in the second quarter in terms of market share and revenue growth. IBM and Google were in the third and fourth place, respectively.