The positive comparisons can be primarily attributable to higher oil prices and strict cost control, which helped its biggest unit — exploration and production — to swing to profitability. Moreover, China’s dominant oil and gas producer’s total revenues for the three months under consideration rose 17.1% from the year-ago period to RMB 481,795 million.

However, PetroChina’s earnings per ADR of 45 cents missed the Zacks Consensus Estimate by a penny on deteriorating results at its refining unit. 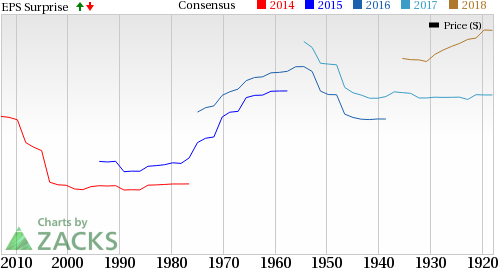 Meanwhile, Sinopec also experienced a jump in its income as the largest petroleum and petrochemical company in Asia saw strong product demand amid stringent cost controls.

In particular, crude oil output, accounting for 61% of the total, fell 5.2% from the year-ago period to 660.1 million barrels (MMBbl). On the other hand, marketable natural gas output was up by 4.5% to 2,539.2 billion cubic feet (Bcf). Overall, PetroChina’s total production of oil and natural gas declined 1.6% year over year to 1,083.4 million barrels of oil equivalent.

However, average realized crude oil price during the first nine months of 2017 was $48.76 per barrel, representing a 36.2% jump from the year-ago period. Further, natural gas price rose 8.6% year-over-year to $5.07 per thousand cubic feet (Mcf). This helped PetroChina’s upstream (or exploration & production) achieve an operating income of RMB 10,983 million — turning around from the year-ago operating loss of RMB 3,949 million. A tight leash on oil and gas lifting costs that decreased 1.9% from the same period last year, also helped results.

Downstream: The Beijing-based company’s Refining & Chemicals business generated an operating income of RMB 27,732 million. This is down 19.2% from the year-earlier period’s earnings of RMB 34,311 million. The deterioration can be attributed to government-capped prices of refined-products (particularly gasoline and diesel) that do not allow PetroChina to pass high refining costs on to consumers. This was partly offset by the group’s strict cost control initiatives.

Nevertheless, a rise in natural gas prices, optimal utilization of its marketing channels and resources, together with pipeline transportation profitability, helped the Chinese behemoth’s segment earnings, which came in at RMB 18,045 million in the period under review. This is a slight improvement from the year-earlier profit of RMB 17,857 million. You can see the complete list of today’s Zacks #1 Rank (Strong Buy) stocks here.

Marketing: The state-owned group sold 125,968 thousand tons of gasoline, diesel and kerosene during January-September 2017, marking an increase of 6.1% year over year. Greater volumes were accompanied by expanded refined products exports, stress on high-margin products and numerous marketing initiatives due to which sales for the division were up 29.8% to RMB 1,205,650 million.

But adverse factors including abundant domestic refined products supply and fierce competition dragged down PetroChina’s profits to RMB 5,734 million from RMB 6,805 million in the same period of last year.

As of Sep 30, 2017, PetroChina’s cash balance was RMB 169,469 million, while net cash flow from operating activities was RMB 244,295 million for the first three quarters of this year. Capital expenditure for the period was RMB 124,552 million, 9.1% higher than the year-ago level.

Meanwhile, one can look at a better-ranked energy player like HollyFrontier Corporation HFC that sports a Zacks Rank #2 (Buy). You can see the complete list of today’s Zacks #1 Rank (Strong Buy) stocks here.

HollyFrontier is one of the largest independent refiners and marketers of petroleum products in the U.S. The Dallas-TX based company has seen the Zacks Consensus Estimate for 2017 and 2018 increase 16.4% and 8.6%, to $1.77 and $2.27 per share, respectively, over 30 days.