Under the deal, Novo Nordisk will implement elements of Emerson’s Project Certainty approach, which would trim down project complexity as well as meet its tight-project schedule. The company’s integrated portfolio of automation technologies and services, including Syncade manufacturing execution system and DeltaV distributed control system would help to reduce Novo Nordisk’s project costs as well as accommodate late-stage project changes. This apart, Emerson will also offer smart automation technologies including measurement instrumentation and valves.

Emerson has a solid history of winning valuable contracts in the energy infrastructure field that are conducive to its top-line performance. Some notable contracts secured include a $20-million design-build contract for an automation project from San Francisco Public Utilities Commission and a contract for Biomass-Fueled Plant in United Kingdom. Such contract wins remain a key growth driver for the company.

Emerson is well-positioned to benefit from global infrastructure growth, as its core businesses hold dominant positions in markets tied to energy efficiency and infrastructure spending.  Moreover, environmental regulations are driving the need for new products, adding to its strength. Going forward, Emerson believes telecommunications infrastructure demand will continue to be one of the strongest growth drivers.

Currently, the company remains optimistic about the prospects of Commercial & Residential Solutions segment as it has been witnessing improving trends in the U.S. and Asian construction markets. Also, the company remains bullish on its Automation Solutions segment backed by favorable trends in power and life sciences as well as improving MRO spending by oil and gas customers. Furthermore, the company’s restructuring efforts, undertaken over the past few quarters, are likely to benefit its upcoming results.

This Zacks Rank #3 (Hold) company has returned 5.2% in the past six months, outperforming the industry’s gain of 2.9%. 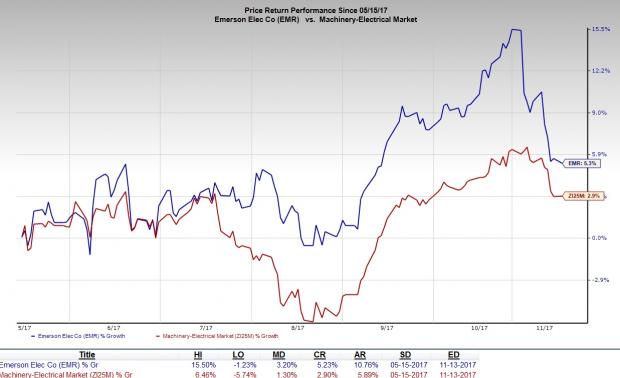 Despite these positives, prolonged softness in the oil and gas markets has affected both capital spending and operational expenditure of clients, which in turn are hurting Emerson’s operations. The company’s Industrial Automation markets in North America have been extremely challenging and the improvements which Emerson anticipated did not materialize, thereby compunding the challenges.

Columbus McKinnon has surpassed estimates thrice in the trailing four quarters, with an average positive earnings surprise of 15.4%.

Kennametal has outpaced estimates thrice in the preceding four quarters, with an average earnings surprise of 20.6%.

Alamo Group has surpassed estimates twice in the trailing four quarters, with an average positive earnings surprise of 6.1%.