However, shares of the company dropped 2.9% in the after-market trading session yesterday. Nonetheless, this Zacks Rank #3 (Hold) company has grown 9.1% in the last three months, outperforming the industry’s upside of 6.3%. 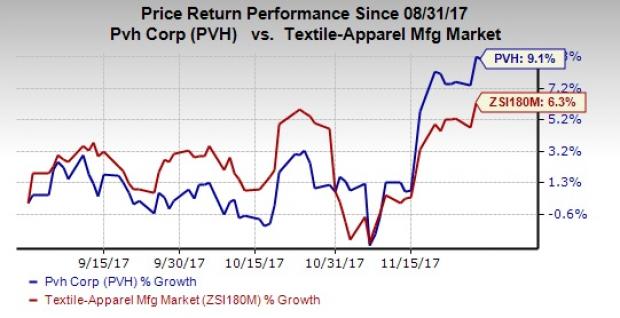 The company posted third-quarter adjusted earnings per share of $3.02, up 16.2% year over year. Earnings also considerably surpassed the Zacks Consensus Estimate of $2.91 and outperformed its own guidance range of $2.88-$2.92. However, currency hurt earnings by 3 cents per share in the quarter.

Calvin Klein’s revenues advanced 6% year over year to $943 million, including about $20 million impact from the deconsolidation of the company’s business in Mexico in November 2016. The growth was driven by a 20% increase in the segment’s International revenues, partially offset by a 5% decline in revenues for the North America business.

Growth in International business was backed by solid performance of wholesale business in Europe, alongside robust growth in the retail business due to 9% comparable store sales (comps) increase and square-footage expansion. Meanwhile, revenues for the North America business was primarily hurt by the deconsolidation of the Mexico business as well as 1% decline in comps. In constant currency, revenue for the segment improved 4%.

Revenues at the company’s Tommy Hilfiger segment jumped 10% to $1 billion, while it improved 7% in constant currency. Growth can primarily be attributed to 16% sales improvement in the brand’s International business, owing to persistent strength in Europe and Asia, and 7% comps growth.

Additionally, the company’s North America business witnessed 2% revenue growth (1% growth in constant currency) driven by 6% increase in comps. This was partly offset by nearly $20 million reduction due to the discontinuation of its directly-operated womenswear wholesale business in the United States and Canada in fourth-quarter fiscal 2016 in connection with the licensing of this business to G-III Apparel Group, Ltd. (GIII).

The Heritage Brands segment’s revenues dipped 7% year over year to $396 million due to a planned change in Wholesale shipment timings from the third quarter to the second quarter. However, comps improved 2%.

In the first nine months of fiscal 2017, the company repurchased about 1.8 million shares for roughly $192 million under its $1.25 billion standing authorization that extends till Jun 3, 2020.

Driven by the solid third-quarter results, improvement in foreign currency rates and continued strength across its brands, PVH Corp anticipates delivering a robust revenues and earnings in fourth-quarter 2017. This favorable view further backed by the strong start to the holiday season and the additional $20 million increase in marketing expenditures to take advantage of the continued momentum across its businesses. Further, the company raised guidance for fiscal 2017 on the aforementioned favorable trends.

For fiscal 2017, the company now projects revenues to rise 7% year over year, while constant-currency revenues are expected to grow 6%. Earlier, the company forecasted revenue growth of 6%, with constant-currency revenues improving 5%. Management expects revenues to continue being dented by the licensing deal with G-III Apparel and a $150 million reduction due to the Mexico deconsolidation.

For fourth-quarter fiscal 2017, the company expects total revenues to jump 11% year over year, while it is anticipated to advance 8% on a constant-currency basis. While fourth-quarter revenues will be positively impacted by the inclusion of the 53rd week, it will bear the brunt of Mexico deconsolidation, the G-III Apparel licensing, and a shift in the selling period in advance of the Chinese New Year, which now occurs in first-quarter fiscal 2018.

Ralph Lauren has gained 7.7% in the last three months. Moreover, it has a long-term earnings growth rate of 15%.

Michael Kors has a long-term EPS growth rate of 7.5%. Further, the stock has returned 38.9% in three months.

Guess? has grown nearly 7.6% in the last three months. Moreover, it has a long-term earnings growth rate of 17.5%.