The confidence level among the nation's homebuilders ended 2017 on a high note as the housing market index (HMI) was at 74 in December. This marks the highest reading since 1999.

The December reading was up from a downwardly revised November level of 69. Before the downward revision, November showed the highest level of builder confidence in eight months.

The builders seem to be shaking off worries associated with the Republican tax plan, and apparently believe that the business incentives in the plan are likely to offset the negatives. Earlier, builders had strongly opposed the plan and were of the opinion that the House Republican tax would eliminate one of the benefits of ownership for many would-be homebuyers.

Nonetheless, the latest spike in builders’ confidence tells the other side of the story and reassures the industry’s strength. In the words of NAHB chairman, Granger MacDonald, "Housing market conditions are improving partially because of new policies aimed at providing regulatory relief to the business community.”

The dynamic performance of the broader construction sector has been majorly buoyed by strong homebuilding activities. Homebuilding spending has increased 6.6% so far this year. Also, there are signs of increased inclination toward home purchases among millennials, a generation that had to some extent refrained from entering the market.

Economists are of the opinion that the rebound in the U.S. economy along with a further decline in unemployment (4.1% in November) will keep the momentum alive for the sector. The November figure marked the lowest since December 2000. The United States has added jobs for 86 straight months, the longest streak so far. Moreover, Americans are highly optimistic about the economy with consumer confidence hitting a 17-year high.

Though the U.S. housing industry is gradually recovering from damages caused by the recent hurricanes, limited land availability, labor shortage and higher material costs, there is nothing to fret about. Also, despite the repeated hikes of the Federal Reserve’s interest rates, optimism surrounding the housing market remains largely unaffected.

In fact, so far this year, the Zacks Homebuilding Industry has widely outperformed the broader market (S&P 500), as you can see below. 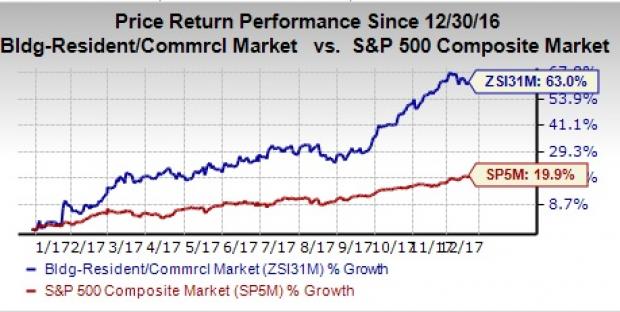 Zacks Editor-in-Chief Goes ""All In"" on This Stock

Conagra (CAG) to Report Q2 Earnings: What's in the Offing?