Key highlights this week include the announcement of a couple of acquisition agreements as well as pipeline news from Biogen (BIIB - Free Report) and Celgene . The M&A announcements relate to the acquisition of Ignyta by Roche and Sucampo Pharmaceuticals by Mallinckrodt.

Celgene Down on Revlimid Combo Data: Celgene’s shares were down on disappointing data on a combination evaluating the company’s blockbuster cancer drug, Revlimid, in treatment-naïve follicular lymphoma patients. The late-stage RELEVANCE study evaluated Revlimid plus Rituxan (R2) followed by R2 maintenance compared to the standard of care with Rituxan plus chemotherapy (R-CHOP, R-bendamustine or R-CVP) followed by Rituxan maintenance. The R2 treatment arm failed to achieve superiority in the co-primary endpoints of complete response or unconfirmed complete response (CR/CRu) at 120 weeks and progression-free survival (Read more: Celgene Down on Discouraging Data on Revlimid).

Celgene’s shares are down 7.6% year to date compared to the 3% gain recorded by the industry it belongs to.

Acquisition Agreements Announced: A couple of acquisition deals were announced this week. The first agreement will see Ignyta being acquired by Swiss pharma giant Roche in an all-cash deal valued at $1.7 billion ($27 per share). Ignyta is focused on developing precisely targeted therapeutics guided by diagnostics for patients with rare cancers. With this acquisition, slated to close in the first half of 2018, Roche will add entrectinib to its portfolio – entrectinib is currently in mid-stage development.

The second agreement will see Sucampo being acquired by Mallinckrodt for $18 per share or approximately $1.2 billion. With this acquisition, Mallinckrodt will get a source of near-term net sales and earnings accretion through Amitiza and will boost its rare diseases pipeline with VTS-270 and CPP-1X/sulindac. This deal is expected to close in the first quarter of 2018. Sucampo is a Zacks Rank #1 (Strong Buy) stock - you can see the complete list of today’s Zacks #1 Rank stocks here.

Biogen’s Shares Down on Alzheimer’s Data: Biogen’s shares declined 3.3% on data from an ongoing Alzheimer’s disease study on BAN2401, which is being developed in collaboration with Eisai. An Independent Data Monitoring Committee said that BAN2401 did not meet the criteria for success based on a Bayesian analysis at 12 months as the primary endpoint in the phase II study. With the study failing to show an early positive result, the companies said that the blinded study, which is being conducted in patients with prodromal or mild Alzheimer’s disease (collectively known as early Alzheimer’s disease) will continue with a comprehensive final analysis to be conducted at 18 months. These results are expected to be obtained during the second half of 2018. The study data comes as a disappointment as positive data would have been a major boost. Moreover, the results have raised concerns about the candidate’s chances of success given the high rate of failure experienced by other companies in bringing Alzheimer’s disease treatments to market (Read more: Biogen's Alzheimer's Drug Misses Goal in Interim Analysis).

BioMarin PDUFA Date Extended: The FDA has extended the Prescription Drug User Fee Act (“PDUFA”) Goal Date for BioMarin Pharmaceutical’s (BMRN - Free Report) pegvaliase by three months to May 28, 2018. BioMarin is looking to get the investigational therapy approved for the reduction of blood phenylalanine (Phe) levels in adult patients with phenylketonuria (“PKU”) who have uncontrolled blood Phe levels on existing management. The extension was expected as the agency had asked the company to submit additional Chemistry, Manufacturing, and Controls ("CMC") information. The company said that due to the Memorial Day weekend, the Action Goal Date will be May 25, 2018 (Read more: Biogen's Alzheimer's Drug Misses Goal in Interim Analysis).

Agios also announced that it has received permission from the FDA to move another pipeline candidate, AG-270, into clinical studies. The company intends to commence a phase I study in the first quarter of 2018. 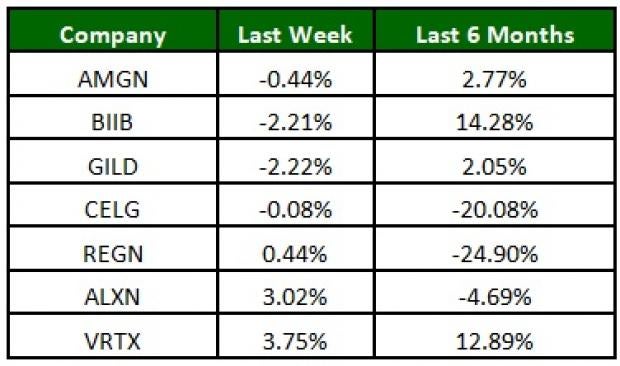 Why You Should Hold Onto Charter Communications (CHTR) Now