Shares of chemical maker, Kronos Worldwide, Inc. (KRO - Free Report) have rallied around 45% over the last six months. The company has also outperformed its industry’s gain of roughly 16% over the same time frame.

Kronos Worldwide has a market cap of roughly $3.1 billion and average volume of shares traded in the last three months is around 484.2K. The company has expected long-term earnings per share growth of around 5%. 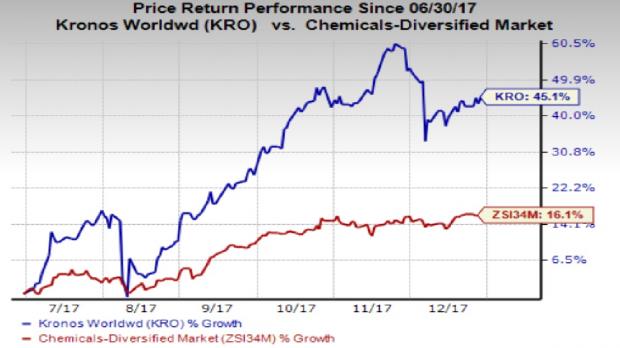 Forecast-topping earnings performance in the last reported quarter and upbeat outlook have contributed to the rally in Kronos Worldwide’s shares. The company witnessed a significant rise in profits in the third quarter on the back of higher average selling prices and increased sales and production volumes.

Earnings of 64 cents per share for the quarter climbed from 19 cents a year ago and also topped the Zacks Consensus Estimate of 45 cents, translating into a positive earnings surprise of 42.2%.

Kronos Worldwide has outpaced the Zacks Consensus Estimate in three of the trailing four quarters, delivering a positive average earnings surprise of 58.8%.

The Zacks Consensus Estimate for earnings for 2017 reflects an expected year-over-year growth of a staggering 425.8%. Moreover, earnings are expected to register a 41.1% growth in 2018.

Kronos Worldwide saw strong sales volumes during the first nine months of 2017. It is witnessing strong demand for titanium dioxide (TiO2) products across most segments. The company is also gaining from higher pricing. It saw average selling prices increasing 21% in the first nine months.

Kronos Worldwide expects its production volumes to be higher in 2017 on a year-over-year basis as production rates this year will be favorably impacted by the implementation of certain productivity-enhancing improvement projects at some facilities. Also, the company anticipates increased sales volume in 2017 compared to 2016.

The company also envisions income from operations in 2017 will be higher on a year-over-year basis, mainly due to an expected increase in average selling prices and the favorable impact of anticipated higher production and sales volumes in 2017.

Koppers has an expected long-term earnings growth of 18%. The stock has gained around 26% year to date.

Huntsman has an expected long-term earnings growth of 8%. The stock has gained around 75% year to date.

Westlake has an expected long-term earnings growth of 10.6%. Its shares are up roughly 90% year to date.