It was a week which saw Delta Air Lines (DAL - Free Report) kick-starting the fourth-quarter earnings season for the airline space on an impressive note. The company’s earnings as well as revenues surpassed expectations.

1. Delta’s fourth-quarter earnings (excluding 16 cents from non-recurring items) of 96 cents per share beat the Zacks Consensus Estimate of 88 cents. Moreover, the bottom line expanded 17.1% on a year-over-year basis. Results were aided by higher revenues. Passenger revenue per available seat mile (PRASM: a key measure of unit revenue) was up 4.2% year over year.

2. American Airlines issued an upbeat guidance for the fourth quarter of 2017. The company now expects total revenue per available seat mile (TRASM) for the quarter to rise in the range of 5-6% year over year compared with 2.5-4.5% projected earlier. The improved outlook can be attributed to higher yields across all the geographical regions and better-than-expected domestic close-in bookings.

Additionally, the company expects pre-tax margin between 6.5% and 7% for the to-be reported quarter. Earlier forecast was in the band of 4.5-6.5% (Read more: American Airlines' Shares Rise on Bullish Q4 Outlook).

3. GOL Linhas anticipates fourth-quarter operating margin in the range of 13.2%-14.2%. This metric (excluding non-recurring expenses) was 12.8% in the year-ago quarter. GOL expects third-quarter unit revenue (RASK) to increase in the 7%-7.5% band.

The airline expects earnings before interest, tax, depreciation and amortization (EBITDA) and earnings before interest and taxes (EBIT) margins, both excluding non-recurring expenses, in the range of 17.5-18.5% and 13.2-14.2%, respectively. Ancillary Revenues (cargo and other) are projected between 12% and 12.2% of total net revenues. Aircraft Rent is projected to be approximately R$230 million in the soon-to-be-reported quarter.

Average fuel price per liter is anticipated to be between R$2.25 and R$2.28. Meanwhile, the carrier expects to incur non-recurring expenses in the range of R$30-R$35 million in the fourth quarter.

4. JetBlue also provided an improved guidance for fourth-quarter RASM. The carrier now expects RASM to increase approximately 1.8%. Previous view had hinted the metric in the band of -0.5% to +1.5%. The low-cost carrier raised its projection for fourth-quarter cost per available seat miles (excluding fuel) by 2 percentage points as a result of the bonus of $1,000 per member, following the new tax law. Fourth-quarter fuel cost per gallon is expected in the band of $1.89 to $1.92.

Meanwhile, December load factor declined 140 basis points to 82.7% as traffic growth (2.7%) was outpaced by capacity expansion (4.4%). In the same month, the carrier registered a completion factor (system wide) of 99.8% with 74.1% flights on schedule.

5. At Spirit Airlines, traffic — measured in revenue passenger miles (RPMs) — came in at 2.14 billion, up 14.8% on a year-over-year basis. Consolidated capacity (or available seat miles/ASMs) also expanded 14.7% to 2.66 billion.

Load factor increased 10 basis points to 80.4% in December 2017. The improvement was owing to traffic growth outpacing capacity expansion. In the same month, the carrier registered a completion factor (system wide) of 98.7% with 80.4% flights on schedule.

Spirit Airlines now expects fourth-quarter TRASM to decline roughly 2% year over year, (previous guidance: decline in the band of 4% to 6%). Better-than-expected yields during the peak holiday periods contributed to the improved guidance. Adjusted cost per available seat miles (excluding fuel) is expected to decline approximately 4% in the soon-to-be-reported quarter.

The following table shows the price movement of the major airline players over the past week and in the last six months. 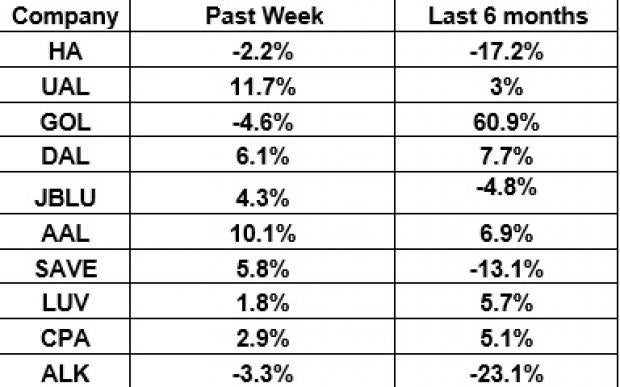 The table above shows that majority of the airline stocks traded in the green over the past week on the back of the bullish unit revenue views and Delta’s favorable earnings reports. Consequently, the NYSE ARCA Airline Index increased 6.3% to $122.81.

Over the course of six months, the NYSE ARCA Airline Index improved 1.5%, driven by impressive gains at GOL Linhas (60.9%). Shares of Alaska Air Group ALK depreciated the most (23.1%) over the period.