In the name of turning its business around, Ericsson ERIC is undertaking another colossal writedown by booking charges roughly amounting to a whopping $1.8 billion. This round of charges is the latest in a series of writedowns that Ericsson has undertaken over the past couple of years, amounting to more than $5 billion.

After an impairment testing, this Swedish telecommunications-equipment maker has decided to write off assets worth SEK 14.2 billion ($1.77 billion), as it struggles to rebuild itself amid tepid sales and vicious competition from Chinese rivals. Another SEK 1 billion ($125 million) non-cash charge will be booked due to the recent U.S. tax reform. Ericsson said that the charges would not impact cash flow, but would affect operating profit in the upcoming fourth-quarter results.

The writedowns primarily affect two of its businesses — digital services and the cloud computing and media unit.

In recent years, the company has had a dramatic fall from grace, marked with repeated earnings misses, eroding profitability and precipitous revenue decline. The year 2016 was a particularly harrowing year for Ericsson, a year in which the company ousted CEO Hans Vestberg, and stunned investors with a massive profit warning.

Tough market conditions, a sustained slump in its core networks business and soft mobile broadband demand have significantly dented Ericsson’s performance in the past couple of years. The beleaguered infrastructure giant’s eroding revenues and multiple profits warnings have left investors high and dry. The stock has plunged 20.1% in the past couple of years, in contrast to the industry’s gain of 7.6%.

However, the company’s shares have recovered somewhat in the recent months, offering the first tentative signs of recovery. In the past six months, Ericsson has gone up 14.4%, higher than the industry’s ascent of 10.4%. 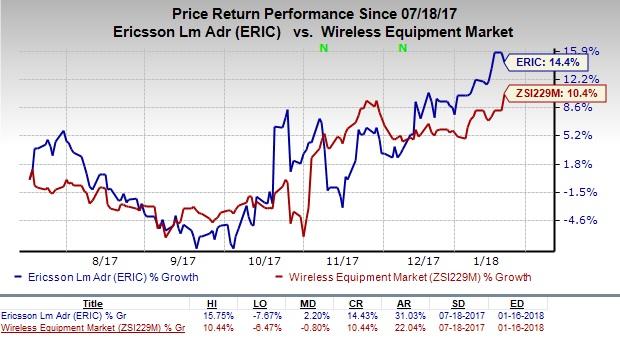 Telecom equipment makers across the world are distressed as customers invest less in 4G services, and even less in 3G, while waiting for the introduction of the next-generation 5G networks. Ericsson has also been hit by competition from Huawei and Nokia Corp. NOK.

In response, the company initiated a restructuring plan to slash costs and streamline Ericsson’s focus areas, as well as explore options for the company’s media business. In March last year, Ericsson had booked charges worth a massive SEK 15 billion, owing to issues with certain contracts, and its struggling media and cloud computing businesses.

The company also hacked its dividend for the first time in eight years, in an attempt to reverse sinking sales caused by the slowdown in spending by wireless carriers and fierce competition.

Nevertheless, Ericsson still hopes to stabilize its operations amid a difficult market this year and remains hopeful of reaching its targeted operating margin of 12% beyond 2018. Slight positives from further managed service contract renegotiation and higher network software sales in the near future will likely be counteracted by strong headwinds of loss of momentum in China and loss of scale.

Whether these steps will allow Ericsson to jump back on the growth track, remains to be seen. However, as of now, we have a Zacks Rank #5 (Strong Sell) on the stock, as we are apprehensive over the impact of the restructuring on the company’s profits and share price in the near term. We also have a subdued view of operator spending and investments in R&D in the near future.

With numerous headwinds on the company’s radar, several analysts have downgraded Ericsson in the past few months, thanks to a bleak view of the company's revenues and margins. They believe a rollout of the 5G technology won't provide enough of a boost to the company's revenue base. Investors looking for exposure to the upcoming 5G upgrade cycle or Internet of Things might consider better-placed players, namely Nokia and Cisco Systems, Inc. (CSCO - Free Report) .

Motorola has a robust earnings surprise history with an average beat of 13.2% for the trailing four quarters, beating estimates all through.