Steel Dynamics, Inc. (STLD - Free Report) logged profit (as reported) of $305 million or $1.28 per share in fourth-quarter 2017, marking a significant increase from $20 million or 8 cents recorded a year ago.

The bottom line in the reported quarter was boosted by a one-time tax benefit of $181 million, resulting from the company's revaluation of its deferred tax assets and liabilities related to the recently enacted U.S. Federal Tax Cuts and Jobs Act of 2017.

Barring one-time gains and costs, adjusted earnings came in at 54 cents per share for the reported quarter, topping the Zacks Consensus Estimate of 49 cents.

Net sales for the quarter went up around 22% year over year to $2,336.5 million, also surpassing the Zacks Consensus Estimate of $2,173 million.

Net sales for 2017 were a record $9,538.8 million, up around 23% year over year. The company’s steel and fabrication operations achieved record shipments in 2017.

The company's fabrication operations raked in sales of $220.5 million, up around 27% year over year. Operating income rose roughly 21% year over year to $21.6 million.

The company generated cash flow from operations of $740 million in 2017.

Moving ahead, Steel Dynamics said that it sees the prevailing and expected macroeconomic and market conditions to benefit domestic steel consumption this year. Demand for steel in the domestic markets remains healthy while demand and pricing have structurally improved globally.

Steel Dynamics believes steel consumption in the automotive market in North America to be steady and the company continues to gain momentum in that space. It also sees sustained additional growth across the construction and energy sectors. The company also noted that it expects the recent tax reform to provide an impetus for additional domestic fixed asset investment and growth.

Steel Dynamics continues to generate strong cash flows and strengthen financial position. The company noted that it remains well poised for growth and is committed to deliver shareholder value through strategic and organic growth opportunities.

Steel Dynamics has outperformed the industry it belongs to over the past three months. The company’s shares rallied 19.7% over this period compared with the industry’s 18.9% gain. 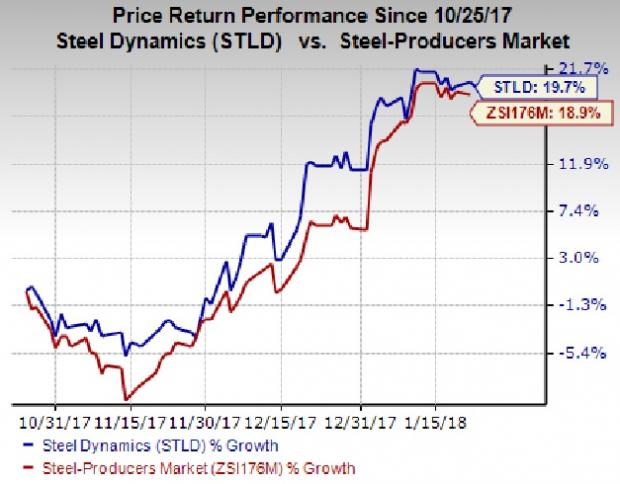 Methanex has an expected long-term earnings growth of 15%. Its shares are up roughly 28% over a year.

Huntsman has an expected long-term earnings growth of 8%. The stock has gained around 62% over a year.

Air Products has an expected long-term earnings growth of 14.1%. The stock has gained around 14% over a year.