Adjusted earnings of $1.49 per share beat the consensus estimate of $1.35 by 10.4%. Also, the bottom line was up 9.6% year over year on the back of higher revenues as well as the company’s share repurchase program, partly offset by higher interest expenses.

Net revenues from continuing operations were $1.2 billion and improved 4% from the prior-year quarter on the back of increased contribution from all its segments. However, the top line lagged the consensus estimate of $1.4 billion by 14.3%.

Wyndham had a great deal of benefit from the U.S. corporate tax reform on fourth-quarter earnings. The company’s various sales building initiatives like marketing campaigns and partnerships, digital experiences, website development, on-property amenities and travel perks to guests have favored earnings and revenues growth in the quarter. However, effects of the recent hurricanes lingered in the quarter, partially affecting both top and bottom lines.

Shares of the company rallied 44.1% in the past year, outperforming the industry’s gain of 38.9%. 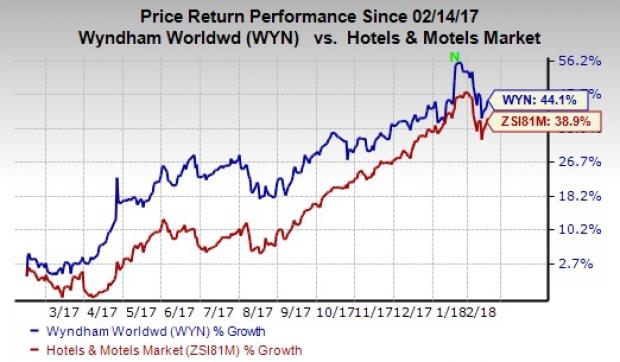 Hotel Group revenues were $332 million, up 5% from the year-ago figure, which reflected higher franchise and royalty fees, increased pass-through marketing, reservation as well as growth in Wyndham Rewards revenues.

Adjusted EBITDA increased 3% to $102 million primarily due to revenue increases, partially offset by the impact of Hurricane Maria on the hotel in Puerto Rico.

The Destination Network no longer includes the Company's European vacation-rentals business and has been classified as a discontinued operation.

Revenues at the segment were $200 million, an increase of 5% from the year-ago figure. While exchange revenues per member rose 7%, the average number of members declined 1%. The upside in exchange revenues was favored by pricing.

Revenues at Vacation Ownership increased 4% year over year to $734 million. The uptick reflects an increase in gross VOI sales as well as higher consumer financing revenues, even though hurricanes negatively impacted VOI sales in the quarter.

Gross VOI sales in the fourth quarter increased 7% from the year-ago period. Meanwhile, tour flow was up 7% and volume per guest (VPG) increased 2%.

Adjusted EBITDA increased 4.7% to $200 million, as higher gross VOI sales and consumer financing revenues were offset by a higher provision for loan losses.

As of Dec 31, 2017, net cash from continuing operations was $880 million, compared with $846 million in the prior year. The increase is primarily due to higher net income.

In the quarter, the company's Board of Directors authorized an increase in quarterly cash dividend to 66 cents from 58 cents per share.

Adjusted EPS was $5.50 per share compared with $5.15 in 2016. The growth in adjusted EPS primarily reflected the repurchase of 6% of outstanding shares in the year.

Adjusted net income from continuing operations is expected within $702-$722 million. The company expects Adjusted EBITDA between $1.330 billion and $1.355 billion, reflecting year-over-year growth of 6-8%.

Adjusted diluted EPS from continuing operations is anticipated in the range of $6.90-$7.05 and is projected to increase 25-28% year over year.