Reliance Steel & Aluminum Co. (RS - Free Report) saw its profits jump in the fourth quarter of 2017, buoyed by a sizable tax benefit. It posted a profit of $301.4 million or $4.09 per share in the quarter, a roughly five-fold surge from $61.7 million or 84 cents per share a year ago. The company recorded a one-time tax benefit of $207.3 million related to the U.S. Tax Cuts and Jobs Act in the reported quarter.

Barring one-time items, earnings were $1.22 per share for the quarter that exceeded the Zacks Consensus Estimate of $1.00.

The company benefited from strong overall demand and higher year over year pricing levels in the quarter, which also contributed to its earnings.

Reliance Steel recorded net sales of $2,376.4 million for the reported quarter, up around 15% year over year. It surpassed the Zacks Consensus Estimate of $2,307 million.

Overall sales volume rose 6.3% year over year while average prices per ton went up 8.8% from the prior-year quarter.

Reliance Steel repurchased shares worth $25 million during the fourth quarter and had roughly 8.1 million shares available for repurchase under its share repurchase program at the end of 2017.

Reliance Steel is seeing an improvement in overall customer sentiment and demand and expects that the ongoing reduction in imports will continue to support higher metal pricing moving ahead. The company is optimistic about business activity levels in first-quarter 2018 and sees continued growth in the end markets in which it operates.

Reliance Steel’s shares have moved up 23% in the last three months, outperforming the industry’s 14.4% gain. 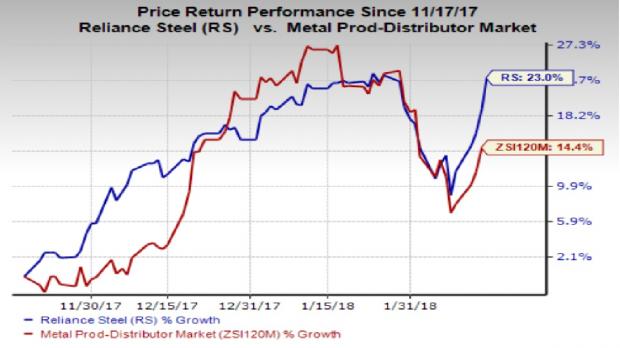 Olympic Steel has an expected long-term earnings growth rate of 7.5%. Its shares rallied around 40% over the past six months.

Methanex has an expected long-term earnings growth rate of 15%. Its shares have gained roughly 32% over the past six months.

Mosaic has an expected long-term earnings growth rate of 9.5%. Its shares have rallied 29% over the past six months.