Nordstrom, Inc. (JWN - Free Report) has been persistently focusing on store-expansion strategy as part of its efforts to grow market share. Recently, the company revealed plans to relocate a Rack store to the latest location in the Sugar House Shopping Center, in Salt Lake City, UT. Spanning across 36,000 square feet, the relocated outlet is expected to open doors in spring next year.

The relocated store will be housed in a building adjacent to the present Rack store close to the Springhill Suites and Whole Foods Market. Situated in the I-80 freeway, it will be roughly three miles from the downtown business district. In fact, the company inaugurated its first store in the Salt Lake City in 1991 and remains keen on serving the community with the latest assortments.

Notably, Nordstrom has four Rack stores and two full-line outlets in Utah. The company has been serving customers in the region since 1981 when it first opened doors at Fashion Place. Currently, it operates 369 outlets across 40 states. Its portfolio includes 122 full-line stores across the United States, Puerto Rico and Canada, two Jeffrey boutiques, 235 Nordstrom Racks, two clearance stores and seven Trunk Club clubhouses along with Nordstrom Local service concept.

Being the off-price retail segment of the company, Nordstrom Rack offers fashion-savvy customers a wide range of on-trend apparel, footwear and other accessories at discounted prices. These Racks usually keep items from the main Nordstrom stores and online store — Nordstrom.com. Additionally, these stores stack products from other major brands sold by the company.

In fact, Nordstrom has been relocating stores in order to suit the customers’ needs and enhance their shopping experience. Prior to this relocation, it announced the relocation of the Oak Park Mall store in Overland Park, Kansas, to Country Club Plaza in Kansas City, Missouri.  The company expects to open this new 116,000 square-foot store by 2021.

Where is Nordstrom Heading?

In the past three months, Nordstrom has gained 10.7% against the industry’s decline of 0.6%. This outperformance can be attributed to the company’s significant progress with respect to its customer-based strategy. Additionally, it is on track to reach long-term growth target of $20 billion by 2020. 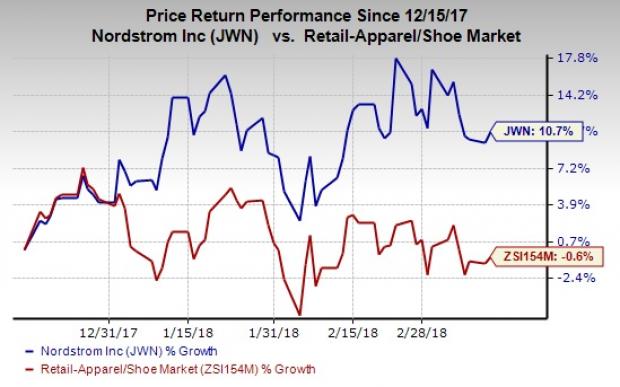 Meanwhile, this  Zacks Rank #2 (Buy) company is strengthening capabilities through further investments, particularly in digital growth. Apparently, it inked a deal to purchase two major retail technology companies, BevyUp and MessageYes, in coherence with the evolving retail industry. Furthermore, it entered into a partnership with Urban Outfitters, Inc.’s URBN Anthropologie to offer more than 200 items from Anthropologie Home at the select Nordstrom full-line stores as well as online.

Of late, Nordstrom’s board of directors (Special Committee) turned down the buyout proposal from the Nordstrom family, stating that the cash bid of $50 per share is inadequate. The Special Committee, consisting of the independent directors, scrutinized the proposal in consultation with its financial advisor and legal counsel and arrived at the decision, in the best interest of the company and its stockholders. The company has also suspended talks on the matter until an improved bid is put forth by the Nordstrom family.

Want More of Retail Stocks in the Same Industry? Check These

Abercrombie & Fitch Co. ANF has a long-term earnings growth rate of 14% and a Zacks Rank #1 (Strong Buy). You can see the complete list of today’s Zacks #1 Rank stocks here.

Gap Inc. GPS, a Zacks Rank #2 stock, pulled off an average positive earnings surprise of 11.1% in the trailing four quarters.

Zacks has just named 4 companies that enable investors to take advantage of the explosive growth of cryptocurrencies via the stock market.

Here's Why You Should Invest in Fluor (FLR) Stock Right Now