BP p.l.c. (BP - Free Report) has selected Susan Dio as the chairman and president of its vast operations in the United Sates.

Since early 2013, John Minge has been leading the company’s U.S business. He will be succeeded by Susan Dio from May 1 onward.

The British energy giant manages a large-scale business in the United States including both upstream and downstream activities. The company also focuses on renewable energies in the country. Notably, since 2005, the company has hitherto spent more than $100 billion for all its U.S activities.

With Susan Dio’s election, BP is going to hand over the reins of responsibility of its vital US operations to a woman for the first time. During 2017, the company’s businesses in the United States contributed to $88.7 billion, representing nearly 34% of the total sales and other operating revenues.

Based in London, BP is among the leading integrated energy players in the world. The company boasts an excellent earnings surprise history, having surpassed the Zacks Consensus Estimate in three of the last four quarters, the average beat being 30.7%. We are also expecting the company to post year-over-year earnings growth of 45.2% through 2018.

Also, BP recorded a free cash flow of ($4.6 billion) in 2016 after West Texas Intermediate (WTI - Free Report) crude touched a historical low of $26.21 per barrel earlier in the same year. However, with a partial recovery in oil prices, BP’s free cash flow turned positive and jumped to $5.3 billion in 2017. 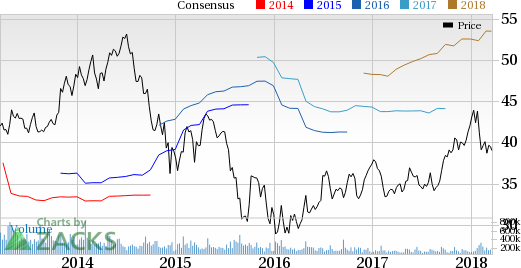 Headquartered in Houston, TX, W&T Offshore is primarily an upstream energy player. The company is expected to witness year-over-year earnings growth of 3.6% in 2018.

Headquartered at Irving, TX, Pioneer Natural Resources is an upstream energy firm. The company has an average positive earnings surprise of 66.9% for the last four quarters.

Headquartered in Midland, TX, Concho is also an upstream energy company. The firm will likely see a year-over-year surge of 73.2% in 2018 earnings.