ETFs to be Impacted by Trump's Tariff Exemptions

The markets have had a rough first quarter. After inflation and rate hike fears spooked the markets in February, it saw a slight recovery as wage growth slowed. However, March has not been welcoming either, as President Donald Trump’s plans of imposing tariffs didn’t bode well for the markets (read: Watch These ETFs as Trade War Risks Rise).

That said, the most recent development has been a win for investors looking for international diversification and major players exporting their metals to the United States. Certain country-specific funds were in the spotlight, owing to their trade relations with the United States. However, domestic steel companies bore the brunt of tariff exemptions.

The Trump administration has decided to grant temporary relief from tariffs to some of its key allies as negotiations take place and the administration prepares to target China for its apparent unfair trade practices. Those relieved are the European Union, Argentina, Australia, Brazil and South Korea, apart from Mexico and Canada, who were already exempted earlier this month.

"There are countries with whom we're negotiating and the question becomes the obvious one that you think, as a matter of business, how does this work? So what he has decided to do is to pause the imposition of the tariffs with respect to those countries," U.S. Trade Representative Robert Lighthizer said.

In other news, Trump announced tariffs on $50 billion in Chinese imports, to which China responded by disclosing plans of reciprocal tariffs on $3 billion of imports from the United States. Risks of a trade war have never been as imminent as sour relations between Washington and Beijing are spooking the markets (read: 8 Must-Watch ETFs if Trump Slams Tariffs on China by Friday).

However, considering the overall impact of the so-called trade war that led to a freefall in the global markets earlier this month, fears have been watered down.  Post the exemptions, less than one-third of total U.S. steel imports will be subject to the tariffs. Per a BBC article, the United States imported $33 billion worth of steel in 2017 and a CNBC chart showing Department of Commerce data reflects that more than two-thirds are imported from countries that have been exempted. 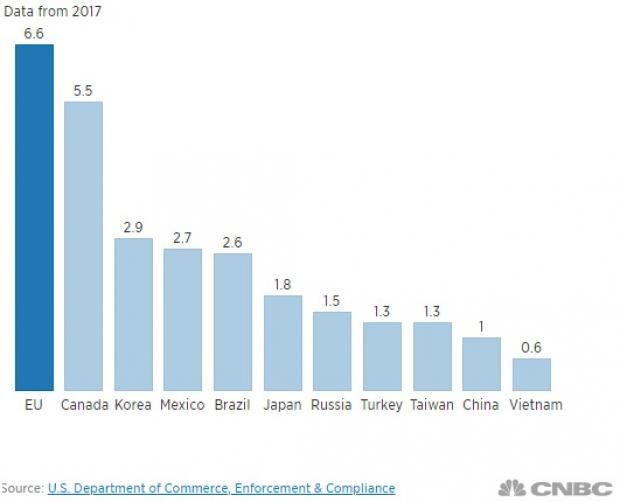 Let us now discuss a few ETFs likely to be impacted by the latest developments.

This ETF is a play on developed European economies using the common currency with a focus on large and mid-cap equities.

It has AUM of $8.9 billion and charges a fee of 62 basis points a year. Financials, Materials and Energy are the top three sectors of this fund with 36.5%, 15.9% and 12.0% allocation, respectively. The top three holdings are Itau Unibanco Holding Pref SA, CIA Vale Do Rio Doce SH and Banco Bradesco Pref SA with 11.5%, 9.6% and 8.2% allocation, respectively. The fund has returned 21.0% in a year. It has a Zacks ETF Rank #3, with a High risk outlook.

This fund is the most popular in the space offering exposure to South Korean equities.

It has AUM of $4.4 billion and charges 62 basis points in fees per year. From a sector look, Information Technology, Financials and Consumer Discretionary take the top three spots, with a 37.5%, 13.3% and 11.5% allocation, respectively. Samsung Electronics Ltd, Sk Hynix Inc and Posco are the top three stocks with 23.1%, 5.7%, and 2.9% allocation, respectively. The fund has returned 22.7% in a year. It has a Zacks ETF Rank #1 (Strong Buy), with a Medium risk outlook.

This fund is the only pure play option offering exposure to steel. The fund has 38% exposure to United States steel companies.

It has AUM of $165.3 million and charges 55 basis points in fees per year. Rio Tinto Plc, Vale SA and Ternium SA are the top three stocks with 10.9%, 8.8%, and 8.4% allocation, respectively. The fund has returned 13.6% in a year. However, SLX erased 5.7% in yesterday’s trading, after tariff exemptions were announced.


In-Depth Zacks Research for the Tickers Above