Dow 30 Stock Roundup: Boeing Wins $8.8B Order From Jet Airways, GE Sells Health IT to Veritas for $1.05B

The Dow rebounded strongly this week after trade war fears receded and tech stocks staged a recovery. Markets declined on Monday after uncertainty over a prospective trade war weighed on investor sentiment. However, the Dow registered strong gains over the next three trading days, registering its first three-session stretch of gains since Feb 26.

Microsoft Corp. (MSFT - Free Report) also gained 2.1% after the company established two separate engineering teams, one for experiences and devices and another for cloud and AI platforms.

The index gained 2.7% over last week. Markets staged a powerful rebound on last Monday as tensions of an ensuing trade war between the United States and China appeared to ease. However, on last Tuesday markets declined sharply due to the tech tumble.

Additionally, the index decreased 3.5% during the month of March. The decline was primarily attributable to President Trump’s decision to impose $60 billion of tariffs Chinese imports, giving rise to fears of an ensuing trade war. The Dow also lost 2.3% in the first quarter of 2018.

The Dow This Week

The index declined 1.9% on Monday due to uncertainty about a global trade war. Technology and Internet stocks continue to suffer following President Trump’s renewed attack on Amazon. Monday’s broad-based market selloff was the worst start to April since the Great Depression of 1929.

All 30 components of the blue-chip index closed below their 50-day moving average. The major loser for the blue-chip index was Intel which plunged 6.1% following a Bloomberg report that Apple would use its own chips for Mac computers instead of Intel’s chips.

The index gained 1.7% on Tuesday led by a partial turnaround in technology stocks. Amazon gained 1.5% following a Bloomberg report, citing sources that the government is not planning to impose any regulations on the company.

Although the recovery was broad-based, investors’ anxiety over an impending trade war and imposition of new regulations on technology and Internet stocks persisted.

The index gained 1% on Wednesday with 27 of its 30 components closing in the green. Markets opened sharply lower yesterday on trade war related concerns. However, they recovered subsequently to a great extent after the White House gave indication that the U.S. government doesn’t want to enter into a trade war with China.

The blue-chip index rebounded from 510 points or 2.1% plunge to finish the session up about 231 points. Consequently, Dow registered its best single-session comeback since, Feb 6, when the blue-chip slipped 2.3% to end up 2.3%.

The index gained 1% on Thursday, finishing in the green on the third consecutive day for the first time since Feb 26. Fears of an impending trade war seemed to ebb. A semblance of stability seemed to have returned to proceedings since Wednesday’s notable turnaround.

The Dow added more than 200 stocks with The Boeing Company (BA - Free Report) and DowDuPont Inc. DWDP emerging as its best performers, adding 2.7% and 2.8%, respectively. Overall, tech stocks were the leading gainers for the day with Facebook, Netflix and Amazon increasing 2.7%, 1.7% and 2.9%, respectively.

Boeing recently entered into an agreement with the second largest Indian-based airline — Jet Airways — for delivering 75 737 MAX narrow body aircrafts, per Reuters. The deal is in line with Indian airlines’ latest rush to expand their fleets to meet the rising demand in the country for both domestic and international flights.

The deal value amounts to approximately $8.8 billion at current list prices which might get lower once the deal finalizes, as airlines typically receive a significant discount on big orders from manufacturers.

However, it is still unknown whether the agreement was a formal order or a non-binding memorandum of understanding. The stock has a Zacks Rank #2 (Buy). You can see the complete list of today’s Zacks #1 Rank (Strong Buy) stocks here.

The other two blocks will be operated by Petrobras along with partners ExxonMobil and Statoil ASA . The remaining two blocks are located in the Sergipe-Alagoas area. These blocks will be operated by ExxonMobil along with partners Queiroz Galvao Exploraçao e Produçao (“QGEP”) and Murphy Oil Corporation MUR. These awards are likely to boost the value of the already held adjacent blocks. (Read: ExxonMobil Wins 8 New Blocks, Fortifies Presence in Brazil)

General Electric Company (GE - Free Report) has inked an agreement to sell a trio of its health-care information technology businesses to private equity firm Veritas Capital for $1.05 billion in cash.

The healthcare division — GE’s third-largest with sales of $19 billion in 2017 — is a solid cash-generator and includes high-growth markets such as life sciences. (Read: GE Revamp Underway, Sells Health IT to Veritas for $1.05B)

The Goldman Sachs Group, Inc. (GS - Free Report) is likely to face yet another suit over its discriminatory pay practices. Per Reuters, allegations for practicing pay discrimination against the bank’s female workforce will be filed as a group in a class-action lawsuit.

The plaintiffs, including around 2,300 female employees of Zacks Rank #3 Goldman, got the U.S. District Judge Analisa Torres’ permission in Manhattan for filing the suit. Plaintiffs accused Goldman of restricting their career path through discrimination.

Female employees and vice presidents, who have worked in Goldman's investment banking, investment management and securities divisions since September 2004, as well as workers in New York City since July 2002, alleged that the bank paid them less as compared with men, as well as misrepresented their performance reviews and promotion options. (Read: Goldman to be Sued Over Discrimination Against Women)

Intel is divesting its software firm Wind River Systems Inc. to alternative asset fund manager TPG. The financial term of the deal were kept under wraps. Intel has a Zacks Rank #3.

Notably, the world’s largest chip maker had bought Wind River Systems for $884 million in 2009 with the aim of stepping out of the traditional semiconductor market and expanding into the consumer electronics space.

Top line data from the ATTR-ACT study showed that treatment with tafamidis led to a statistically significant reduction in the combination of all-cause mortality and frequency of cardiovascular-related hospitalizations – the primary endpoint - compared with the placebo at 30 months. The safety data also demonstrated that tafamidis was generally well tolerated by patients. (Read: Pfizer's Rare Disease Candidate Meets Endpoint in Phase III) 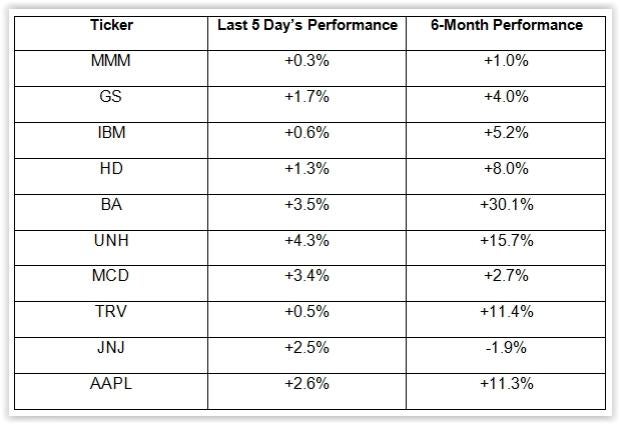 Fears of an impending trade war receded over three successive trading days, leading to substantial gains for stocks. However, Trump’s announcement of an additional $100 billion worth of tariffs on Chinese imports are likely to heighten trade war related concerns. Given such a backdrop, investors will once again look to key economic releases to provide much needed optimism in the week ahead.

Biogen Cracks the Case With AbbVie for Humira Biosimilar