The yield on the 10-year Treasury note, a benchmark for interest rates, hit 3% for the first time in about four years. The Federal Reserve, in fact, has already stepped up the pace of monetary tightening from two to three additional rate hikes this year.

Rising inflation expectations led to Treasuries getting sold off. After all, higher commodity prices diminish the value of a bond’s fixed interest payments. The 10-year yield increased as treasuries came under pressure.

The 10-year government bond yield increased 0.9 basis points (bps) to 2.983% on Apr 24, after touching a four-year intraday high of 3.001%, according to Tradeweb data. The benchmark bond yield had exceeded the 3% mark briefly in 2013 and January 2014, which was toward the end of the bond market wipeout, better known as the “taper tantrum.” 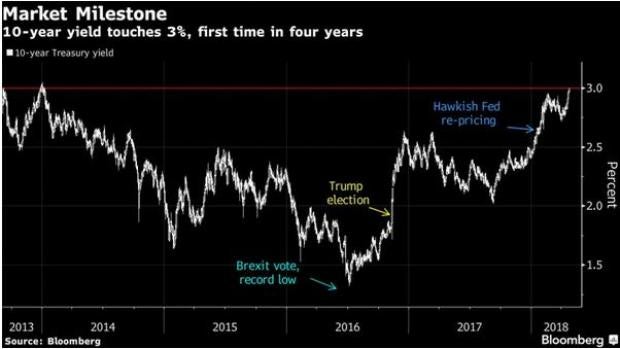 In fact, head of U.S. rates strategy at BMO Capital Markets, Ian Lyngen expects the bond yield to hover near 3.047% in the near term, which would see the yield go past the highs seen in January 2014, propelling it to its loftiest levels since 2011.

The 10-year is used as a proxy for many other important financial matters, such as mortgage rates. Fed officials, for now, have rekindled the idea to raise federal funds rate four times this year and not three times as previously indicated. In March, the Fed has already raised rates a quarter point to a range of 1.5% to 1.75%. On Apr 20, the Fed-fund futures market witnessed a 40.2% chance of four rate hikes this year, much higher than 28.6% estimated in the previous month.

Rising inflationary pressures and speculations that the Fed will take aggressive steps in hiking rates have kept the yield at elevated levels for now.Consumer prices are expected to scale north mostly due to a rally in oil and raw material prices. Oil prices rose to the highest level on Apr 24 since Nov 24, lifted by hearsay that U.S. sanction on Iran will be put into place by May.

American companies, by the way, are paying a significant amount for purchasing raw materials. As per HIS Markit, the cost of raw materials and partly finished goods increased at the fastest pace in nearly five years. Trump’s recent move to impose tariffs on steel and a series of Chinese goods were partly to blame.

Defensive sectors known as “bond proxies”, especially, have fallen out of favor. The industries including utilities, consumer staples, telecom and real-estate are known for providing higher dividend yields, but, with Treasury yields climbing such stocks have lost their charm. Moreover, bonds are providing encouraging yields without the higher risk that comes with equities.

In a sign of how money is being pulled out of such sectors, the Utilities SPDR ETF has seen outflows of $739.8 million in the past month and nearly 833 million has been redeemed from the Staples SPDR ETF so far this year.

Which Sectors Gain From the Rise?

Shares of banks and insurance companies were bolstered by higher interest rates in the form of an uptick in bond yields. Higher interest rates can boost bank profits as they increase the spread between what banks earn by funding longer-term assets, such as loans, with shorter-term liabilities.

Rising rates also act as a boon for insurance companies as they derive their investment income from investing premiums, which are received from policyholders in corporate and government bonds. Yields and coupons on these bonds rise in response to a hike in Fed fund rates and bank interest rates. This enables life insurers to invest their premiums at higher yields and earn more, expanding their profit margins.

Rate hikes, in the meantime, indicated that the economy is in fine fettle. After all, the jobless rate is at a 17-year low, wages are improving and consumer confidence continues to hover at record high levels. All these lead to higher levels of spending, which spells good times for consumer discretionary companies like automakers, casinos, homebuilders, apparel retailers and cruise lines.

Technology firms also stand to gain from a rate hike. Interest rates correlate with an economy that is getting stronger day by day. And a stronger economy could easily boost their bottom lines. Rising rates may also compel would-be home buyers to stop searching for houses and instead improve their existing ones.

We have, thus, selected five solid stocks from the aforesaid sectors poised to gain from the current interest rate scenario. These stocks flaunt a Zacks Rank #1 (Strong Buy) or 2 (Buy).

Equity Bancshares, Inc. (EQBK - Free Report) operates as a bank holding company for Equity Bank that provides a range of financial services, primarily to businesses, business owners, and individuals. The company has a Zacks Rank #2. The Zacks Consensus Estimate for its current-year earnings rose 1.5% in the last 60 days. The stock’s projected growth rate for the current year is 37.9%, compared with the Banks - Northeast industry’s gain of 24%.

American Financial Group, Inc. (AFG - Free Report) provides property and casualty insurance products in the United States. The company has a Zacks Rank #2. The Zacks Consensus Estimate for its current-year earnings climbed 0.5% in the last 60 days. The stock’s estimated growth rate for the current year is 25.8%, higher than the Insurance - Property and Casualty industry’s gain of 19.9%.

Guess', Inc. (GES - Free Report) designs, markets, distributes, and licenses lifestyle collections of apparel and accessories for men, women, and children. The company has a Zacks Rank #1. The Zacks Consensus Estimate for its current-year earnings rose 16.5% in the last 60 days. The company is expected to return 41.4% this year, higher than the Textile - Apparel industry’s estimated return of 12.5%. You can see the complete list of today’s Zacks #1 Rank stocks here.

DXC Technology Company (DXC - Free Report) , together with its subsidiaries, provides information technology services and solutions. The company has a Zacks Rank #2. The Zacks Consensus Estimate for its current-year earnings increased 0.4% in the last 60 days. The stock’s estimated growth rate for the current year is 153.6%, higher than the Computers - IT Services industry’s gain of 16.6%.

At Home Group Inc. (HOME - Free Report) operates home decor superstores in the United States. The company has a Zacks Rank #2. The Zacks Consensus Estimate for its current-year earnings moved up 2.5% in the last 60 days. The stock’s estimated growth rate for the current year is 29.8%, better than the Retail - Home Furnishings industry’s gain of 20.6%.