Public Service Enterprise Group Inc.’s (PEG - Free Report) subsidiary, Public Service Electric and Gas Company (PSE&G), recently got the regulatory go-ahead to start operations for the next phase of its Gas System Modernization Program (GSMP II). The approval for the multi-party settlement was granted by the New Jersey Board of Public Utilities (BPU).

Under GSMP II program, the company plans on investing $1.9 billion for replacing and modernizing its existing gas systems.

Details of the Infrastructure Upgrades

PSE&G aims at implementing several infrastructural upgrades under the five-year program. It plans to replace 875 miles of aging cast iron and unprotected steel gas pipes with strong and durable plastic piping, reducing the potential for leaks and release of methane gas. Alongside, it will install flow valves in large numbers that would automatically deactivate gas flow when a service line gets damaged.

The growth prospect of natural gas continues to be favorable in the long run, as the commodity’s long-term demand is expected to soar due to the transition toward a low carbon future. In line with this, the EIA predicts global demand for natural gas to grow from 340 Bcf (Billions Of Cubic Feet) per day in 2015 to 485 Bcf per day by 2040. Such massive growth projections must have enticed natural gas providers, like Public Service Enterprise, to strengthen its position in the natural gas space by modernizing its existing gas infrastructure.

Furthermore, the ongoing period of low natural gas prices along with the investments made by PSE&G provides a perfect opportunity for the company to replace and upgrade its gas system with minimal cost impact on customers. In fact, management expects that the GSMP II upgrades will keep customer bills low and the average annual bill for a typical residential customer is expected to increase by a mere less than 2% per year, during the five years. Such strategic investment programs are expected to help the company offer more reliable, resilient, cleaner and affordable energy to customers.

Public Service Enterprise Group has outperformed the broader industry in the past one year. During this period, the company’s shares gained 13.8% compared with the broader industry’s decline of 6.3%. The outperformance may have been caused by its solid portfolio of regulated and non-regulated utility assets that offer significant long-term growth potential. 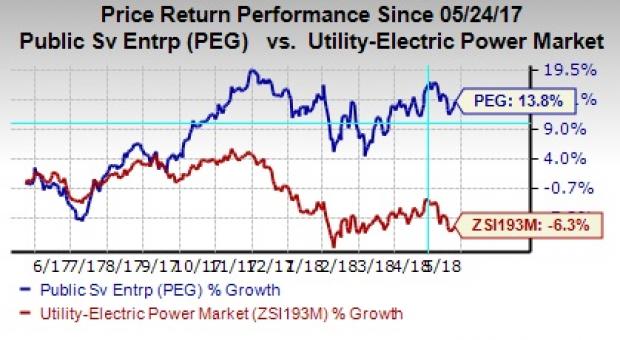 NRG Energy posted an average positive earnings surprise of 507.93% over the past four quarters. The Zacks Consensus Estimate for 2018 earnings was up by $1.61 to $3.29 over the past 90 days.

TerraForm Power has an average positive earnings surprise of 114.71% for the past four quarters. The Zacks Consensus Estimate for 2018 earnings has risen by 60 cents in the past 90 days.

Atlantic Power posted an average positive earnings surprise of 7.24% in the past four quarters. The Zacks Consensus Estimate for loss was narrowed by 18 cents for 2018 over the past 60 days.