The contract is valued at $90 million and has been awarded by the Air Force Life Cycle Management Center, Electronic Warfare, Robins Air Force Base, Georgia. Per the terms, Raytheon will offer fabrication, integration, testing and delivery of line replaceable and shop replaceable units for the radar system.

Work related to the deal will be executed in Goleta, CA and Forest, MS. The entire work is scheduled to be completed by May 2023. Raytheon will utilize Japanese foreign military sales funds to partially finance the task.

Raytheon’s AN/ALR-69A is the world’s first all-digital radar warning receiver that offers situational awareness in an affordable price. The ALR-69A(V) helps in the suppression of enemy air defenses, provides easy cross-platform integration, enhanced spectral and spatial coverage for high-sensitivity detection in dense signal environments. Per Raytheon, the ALR-69A is compatible with virtually any airborne platform.

Over the past few years, Raytheon has witnessed radar related success from major investments including those made in Gallium Nitride (GaN), which helps in amplifying radio energy for radars, jammers and other devices.

Notably, Raytheon’s SAS unit reported first quarter 2018 revenues of $1.57 billion, that inched up a mere 1% year over year.  We may expect the latest contract win to add more impetus to this unit’s growth in the second quarter.

Considering such favorable budgetary revisions, we expect the company to win more such radar related contracts in days ahead.

Raytheon’s stock has improved about 29.3% in the last twelve months, compared with the broader industry’s gain of 27.4%. The outperformance was most likely led by the company’s strong international sales and a robust balance sheet. 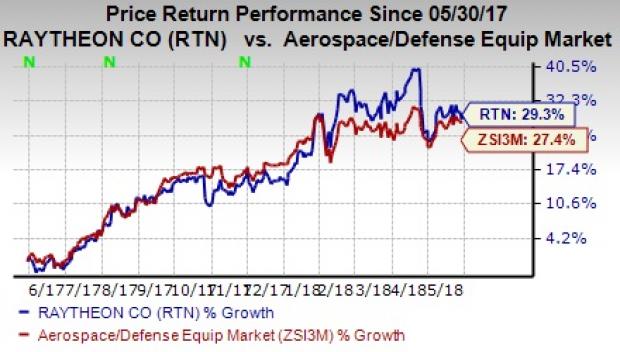 AeroVironment recorded an average positive earnings surprise of 147.43% in the last four quarters. The company’s long-term growth rate is pegged at 20%.

L3 Technologies recorded an average positive earnings surprise of 7.42% in the last four quarters. The Zacks Consensus Estimate for 2018 earnings has risen by 1.9% to $9.64 in the last 90 days.

Wesco Aircraft Holdings long-term growth rate is pegged at 12%. The Zacks Consensus Estimate for 2018 earnings has risen by 10% to 77 cents in the last 90 days.