Majority of the work will be carried out in El Segundo, CA, St. Louis, MI and the rest would be performed in various locations across the United States. Work related to the deal is expected to get complete in June 2020.

Such major developments have enabled Boeing in witnessing strong demand for its fighter aircraft and major aerospace programs, including the F-18 aircraft. This is evident from the contract that it secured from Kuwait in the first quarter for delivering 28 F-18 Super Hornets. We believe that this latest contract will also help in substantiating Boeing jet fighters’ strong position in the global market.

As Boeing’s key forte lies in manufacturing combat-proven aircraft, it has inevitably secured large number of contracts from the Pentagon for long, courtesy of its proven expertise in aerospace programs. Subsequently, revenues of its Defense, Space & Security (BDS) segment witnessed a 13% rise year over year to $5.76 billion in first-quarter 2018.

Further, last month Boeing entered into an agreement to acquire KLX Inc., a major independent provider of aviation parts and services in the aerospace industry. The acquisition, once completed, will certainly help Boeing to enhance its global parts distribution and supply chain services, accelerate Global Service’s growth strategies, and position the company in effectively serving customers in a $2.6- trillion, 10-year services market.

Meanwhile, President Trump proposed fiscal 2019 defense budget in February that provisioned major war fighting investments of $21.7 billion for aircraft. Further, it also included an investment plan of $2 billion for procuring 24 F/A-18Jets. Such proposed inclusions reflect solid growth prospects for the BDS segment, which in turn are likely to boost the company’s profit margin.

Boeing’s stock rallied about 94.5% in a year compared with the industry’s growth of 43.3%. The outperformance was primarily led by the robust worldwide demand for its commercial aircraft and military jets. 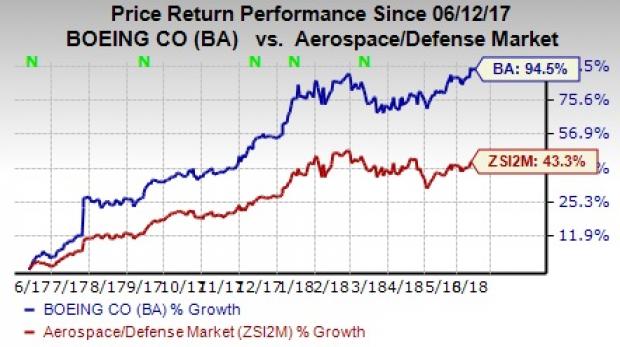 Northrop Grumman recorded an average positive earnings surprise of 13.87% in the last four quarters. The Zacks Consensus Estimate for 2018 earnings has risen by 2.2% to $9.67 in the last 90 days.

L3 Technologies recorded an average positive earnings surprise of 7.42% in the last four quarters. The Zacks Consensus Estimate for 2018 earnings has risen by 5.3% to $16.40 in the last 90 days.

Wesco Aircraft Holdings’ long-term growth rate is pegged at 12%. The Zacks Consensus Estimate for 2018 earnings has risen by 10% to 77 cents in the last 90 days.