Why Amazon (AMZN) Is A Strong Buy Stock Right Now

Amazon’s (AMZN - Free Report) growth has helped its shares skyrocket for more than a decade, which might leave some investors upset they didn’t buy Amazon stock a long time ago. Clearly, getting in on the ground floor would have been amazing, but now still looks like a great time to buy Amazon because Jeff Bezos’ behemoth is poised for more growth and is currently a Zacks Rank #1 (Strong Buy).

And this was just a quick overview of Amazon’s staggering scale. So now let’s move onto some more of Amazon’s current fundamentals.

Shares of Amazon have skyrocketed over 300% during the last three years, which crushes the S&P 500’s 34% climb, and also thoroughly outpaces Facebook's (FB) 139% surge, as well as Wall Street darling Micron’s (MU) 149% growth. 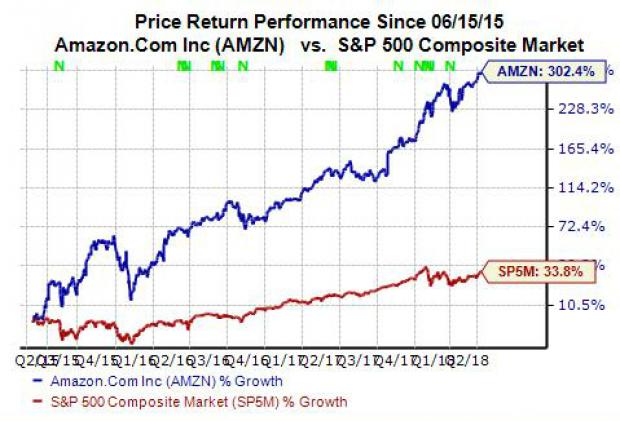 Coming into Wednesday, Amazon was trading at 105.3X forward 12-month Zacks Consensus EPS estimates, which does mark a massive premium compared the S&P 500’s 17.3X. It is always worth remembering that Amazon doesn’t really care about earnings as it continues to pursue expansion.

Yet, Amazon stock has traded as high as 282.7X over the last year, with a year-long median of 146.4X. AMZN is currently trading almost directly in line with its 52-week low, which means it is hardly a stretch to say that Amazon stock looks rather attractive at this current valuation.

Let’s also take a quick look at the company’s forward P/E divided by its P/E to growth ratio or PEG, which is a somewhat more useful valuation metric to evaluate growth companies like Amazon. AMZN is currently trading at 3.5. This comes in above the S&P 500’s average of 1.8. But Amazon stock compares more favorably against its own history.

AMZN stock has traded as high as 9.5 over the last three years and rested at 7.7 as recently as February. Amazon is also trading below its three-year median of 3.9 and currently presents a discount against fellow growth focused tech firm Nvidia’s (NVDA - Free Report) 3.6.

Let’s close by quickly looking at Amazon’s growth outlook. Our current Zacks Consensus Estimates are calling for Amazon’s second-quarter revenues to surge by nearly 41% to $53.46 billion. The company’s full-year sales are projected to reach $237.97 billion. This would mark growth of roughly 34% from 2017, which is pretty incredible for a company of its size and age.

The company well-known on Wall Street for casting earnings aside is projected to see its adjusted Q2 earnings skyrocket 525% to $2.50 per share. Amazon’s fiscal 2018 earnings are expected to expand by 180% to reach $12.74 per share.

Investors should also note that during the last 60 days, Amazon has earned 14 earnings estimate revisions for the second quarter, with nearly 100% agreement to the upside. During this same time period, Amazon received 17 upward revisions for the full-year against just one downward revision.