Work related to the deal will be performed in Sterling Heights, MI, and is expected to get completed in Mar 31, 2020. General Dynamics will utilize fiscal 2018 procurement of weapons and tracked combat vehicles’ funds for completing the task.

The eight-wheeled, armored combat vehicle is powered by a 350 horsepower Caterpillar JP-8 diesel engine that provides the U.S. Army with an effective mix of capabilities, including infantry transport offensive firepower and reconnaissance. The Stryker's other capabilities include the anti-tank guided missiles, mobile C4ISR, engineering and fire support, mobile gun system, and medical evacuation.

The vehicle is employed in Stryker Brigade Combat Teams, light and mobile units based on the brigade combat team doctrine that relies on vehicles connected by military C4I (Command, Control, Communications, Computers, and Intelligence) networks.

The vehicle was outfitted with a new double-V hull, to survive in IED-prone zones of Afghanistan. Such improvements in the design led to staggering improvements in soldier survivability, providing protection in open terrain areas.

With widespread geo-political tension around the globe, many nations are strengthening their arsenals and taking initiatives to upgrade land-combat military vehicles. This in turn should boost General Dynamics’ growth, with the company being one of the major players in the wheeled military vehicle market.

Notably, General Dynamics' Combat Systems segment that manufactures wheeled combat vehicles registered $1.44 billion of sales in the first quarter of 2018, reflecting 11.9% year-over-year growth. We may expect General Dynamics to witness similar strong results in this segment in upcoming quarters as well, buoyed by strong demand for its combat-proven war vehicles that eventually led to the latest contract win. This, in turn, should expand the company’s profit margin.

Furthermore, the fiscal 2019 defense budget, recently approved by the U.S. Senate, provisions for a spending plan of $5.8 billion on Ground Systems. Such robust budgetary allotments should aid General Dynamics in acquiring major contracts from the Pentagon, related to its wheeled combat and tactical vehicles.

General Dynamics’ stock has lost 6.4% in the past year against its industry’s growth of 30%. The underperformance may have been caused by the intense competition that the company faces in the aerospace-defense space. 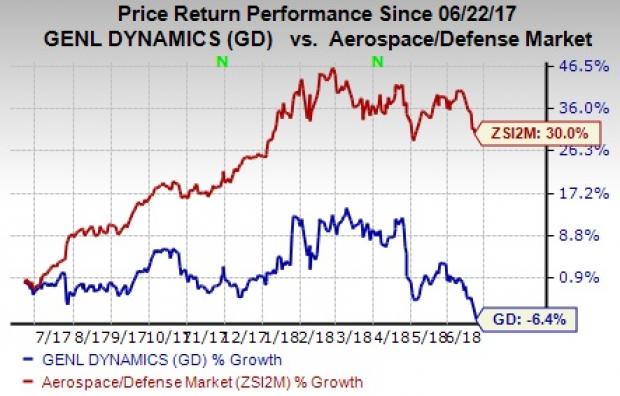 Northrop Grumman delivered an average positive earnings surprise of 13.87% in the last four quarters. The Zacks Consensus Estimate for 2018 earnings has risen by 5.65% to $16.44 in the last 90 days.

Textron came up with an average positive earnings surprise of 16.64% in the last four quarters. The Zacks Consensus Estimate for 2018 earnings has risen by 2.94% to $3.15 in the last 90 days.

Wesco Aircraft Holdings’ long-term growth rate is pegged at 12%. The Zacks Consensus Estimate for 2018 earnings has risen by 10% to 77 cents in the last 90 days.

Krzanich Leaves Intel with Many Questions (and a Few Answers)