Boeing Wins $1.5B Deal for Delivering F/A-18 Jets to Kuwait

The Boeing Company (BA - Free Report) recently secured a contract for the production and delivery of 22 F/A-18E and six F/A-18F Super Hornets to support the government of Kuwait. Work related to the deal is scheduled to be over by January 2021.

Valued at $1.5 billion, the contract was awarded by the Naval Air Systems Command, Patuxent River, Maryland. Majority of the order will be carried out in El Segundo, CA and Hazelwood, MO.

The company will utilize foreign military sales fund to finance the task.

As a result, Boeing is witnessing strong demand for its fighter aircraft and major aerospace programs, including the F-18 aircraft. This is evident from the contract that it secured from Kuwait in the first quarter for delivering 28 F-18 Super Hornets.

Boeing’s key forte lies in manufacturing combat-proven aircraft. It has inevitably secured large number of contracts from the Pentagon for long, courtesy of the company’s proven expertise in aerospace programs. Subsequently, revenues of its Defense, Space & Security (BDS) segment witnessed a 13% rise year over year to $5.76 billion in first-quarter 2018.We expect the latest contract along with a handful of other notable deals to help Boeing’s BDS segment deliver such solid performance in upcoming quarters as well.

In this context it is imperative to mention that FMS contracts play a key role in driving Boeing’s operational performance. Evidently, the company’s backlog at BDS stood at $50 billion, 36% of which comprised orders from international clients.

Interestingly, in terms of international sales for its F-18 fleet, the company enjoys a strong alliance with Kuwait. In fact, in June, Boeing won a $179 million contract for procuring system configuration set H12K to support Kuwait’s fleet of F/A-18E/F jets. Such contract wins along with the latest one should further strengthen Boeing’s relationship with Kuwait’s Air Force, thereby bolstering its position in the expanding military market overseas.

Meanwhile, the recently announced fiscal 2019 defense budget provisioned major war fighting investments of $21.7 billion for aircraft. It also included an investment plan of $2 billion for procuring 24 F/A-18Jets. Such proposed inclusions reflect solid growth prospects for the BDS segment, which in turn are likely to boost the company’s profit margin.

In a year’s time, Boeing has rallied about 65.3% compared with the industry’s increase of 27.4%. The outperformance was primarily led by the robust worldwide demand for its commercial aircraft and military jets. 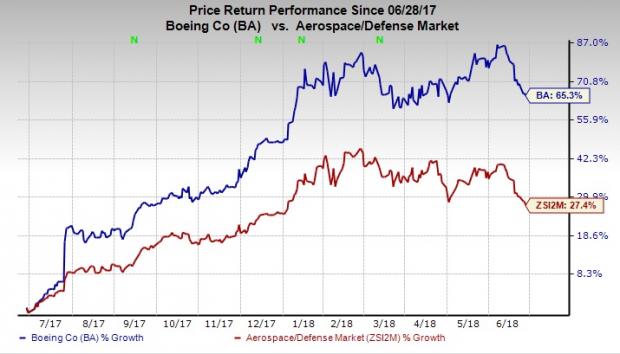 Northrop Grumman delivered an average positive earnings surprise of 13.87% in the last four quarters. The Zacks Consensus Estimate for 2018 earnings moved north 5.65% to $16.44 in the last 90 days.

Textron came up with an average positive earnings surprise of 16.64% in the last four quarters. The Zacks Consensus Estimate for 2018 earnings climbed 2.95% to $3.15 in the last 90 days.

Wesco Aircraft Holdings’ long-term growth rate is projected at 12%. The Zacks Consensus Estimate for 2018 earnings moved up 10% to 77 cents in the last 90 days.