Should You Buy Amazon (AMZN) Stock On Prime Day?

Shares of Amazon AMZN opened higher Monday, touching another new all-time high directly before the start of its annual Prime Day. Aside from the hype and gimmicks surrounding its widely popular shopping holiday, Prime Day is important because although AWS has expanded, Jeff Bezos’ firm is still a retail business at its core.

Amazon Prime Day kicks off Monday afternoon and runs for 36 hours, with “more than one million deals” available to shoppers around the world, according to the company. This list includes everything from clothing to big-ticket items such as TVs and Amazon-branded electronics.

The company’s growth has forced the likes of Target TGT, Walmart WMT, Costco COST, and nearly every other retailer to revamp their business models, bolster their e-commerce platforms, and implement delivery. Amazon also recently made a big push into the pharmacy business with its PillPack purchase. 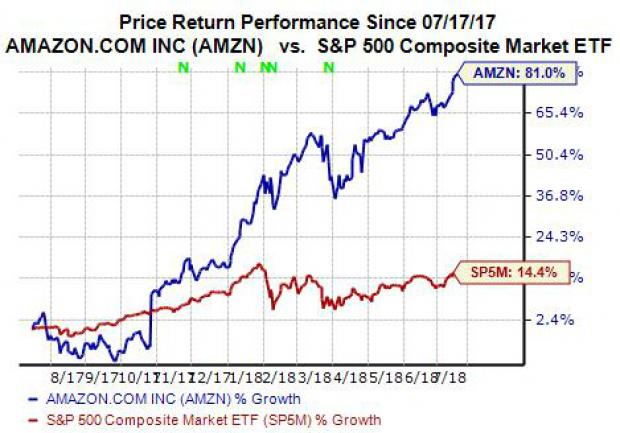 Amazon’s fantastic performance has not helped the company offer solid value to this point. But investors should note that Amazon does not care much about earnings or its bottom line, while it actively expands at a rapid speed.

Amazon is set to report its second-quarter financial results Thursday, July 26. So let’s take a look at what investors should expect from the company next week.

Our current Zacks Consensus Estimates are calling for Amazon’s Q2 revenues to surge by nearly 41% to hit $53.46 billion. At the other end of the income statement, the company is projected to see its adjusted Q2 earnings skyrocket by 522% from $0.40 per share in the year-ago period to $2.49 per share.

Investors should note that during the last 60 days, Amazon has earned two earnings estimate revisions for the second quarter, with 100% agreement to the downside, along with this same revision ratio for its current full year. Meanwhile, Amazon’s quarterly earnings estimate has fallen by one cent over this period.

However, AMZN’s Most Accurate Estimate—the representation of the most recent analyst sentiment—called for earnings of $2.67 per share. This comes in 18 cents above our current consensus estimate and means some analysts might be expecting more from Amazon’s bottom line as we get closer to the company’s report date. Amazon is currently a Zacks Rank #3 (Hold) and might be worth considering even as it sits at a new all-time high.

What Is Coda Octopus, and Why Did Its Stock Skyrocket Today?