Should You Buy Facebook (FB) Stock Ahead of Q2 Earnings?

Shares of Facebook touched a new all-time high on Monday just two days before the company is set to report its quarterly financial results. Now the question is should investors buy Facebook stock ahead of Wednesday’s Q2 earnings release?

Facebook has been in the news for all the wrong reasons for much of the year, yet the company’s actual business remains strong. The firm’s daily active user figure popped 13% in the first quarter to hit 1.45 billion. Facebook’s monthly active user total climbed by the same percentage to hit 2.2 billion. Investors should also note that Facebook’s photo-sharing app Instagram recently hit 1 billion MAUs on its own, which tops Snapchat (SNAP - Free Report) and Twitter’s combined user totals.

The social media company’s growing user base helps it continue to attract advertisers, which is hugely important since Facebook makes roughly 99% of its revenues from ads. Looking ahead, Facebook and Google (GOOGL - Free Report) are set to continue to grab a huge chunk of the total U.S. ad budget.

Meanwhile, Facebook has expanded its live streaming content, in the age of Netflix (NFLX - Free Report) , with a focus on news-style shows as well as live sports. The company has also invested in VR and other potential growth areas. And, like Facebook did with Instagram, the firm will likely continue to try to scoop up the next hot tech startups coming out of Silicon Valley.

Moving on, shares of Facebook have surged roughly 120% over the last three years and 76% during the last 24 months. Investors will also see that Facebook stock has soared since its late-March lows. 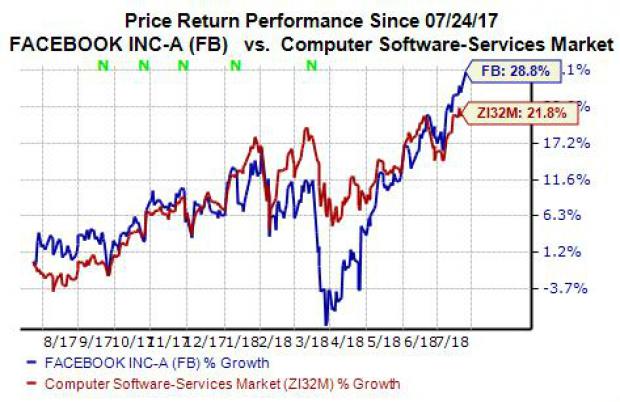 Facebook stock is currently trading at 24.3X forward 12-month Zacks Consensus EPS estimates, which represents a significant discount compared to its industry’s 33.4X average. Investors should also note that FB has traded as high as 31.5X over the last year, with a one-year median of 27X.

Extending our view further, Facebook is currently trading not too far above its five-year low, which it hit in March. Therefore, it is pretty easy to say that Facebook stock appears attractive at its current level.

Our current Zacks Consensus Estimate is calling for Facebook’s Q2 revenues to touch $13.43 billion, which would mark a 44% climb from the year-ago quarter. For the year, Facebook’s top line is expected to expand by nearly 41% to hit $57.29 billion.

At the bottom of the income statement, FB’s adjusted quarterly earnings are projected to pop by 32.6% to reach $1.75 per share, while its full-year EPS figure is expected to expand by over 25%.

Investors also need to understand FB’s recent earnings revisions trends to see if they want to buy FB before it reports. Facebook has received four upward earnings estimate revisions within the last 60 days for both Q2 and fiscal 2018, against zero downward changes. Facebook has earned one upward revision for the same two periods, over the previous seven days.

However, Facebook’s Most Accurate Estimate—the representation of the most recent analyst sentiment—is calling for earnings of $1.74 per share, which is one cent worse than our current consensus estimate.

With that said, Facebook has topped our estimates in the trailing 11 periods. We judge the price effect of these earnings beats by comparing the closing price of the stock two days before the report and two days after the report, and FB stock has popped in eight out of these last 11 windows—including a 9.6% surge last quarter and a 3.2% climb in Q4.

Facebook is currently a Zacks Rank #2 (Buy) and sports “A” grades for both Growth and Momentum in our Style Scores system. Based on Facebook’s continued importance to advertisers, its growing user figures across its many platforms, its solid valuation picture, and strong earnings trends, Facebook looks like it might be a stock worth buying before it reports its Q2 financial results after market close on Wednesday, July 25.