How Worried Should Investors Be About Facebook (FB) Stock?

Facebook FB has seen its stock price sink over 13% since it reported second-quarter financial results that highlighted some potentially scary trends.

Reports surfaced last week that Facebook is in talks with JPMorgan Chase JPM, Wells Fargo WFC, Citigroup C, and U.S. Bancorp USB to see if the banking giants would be open to partnerships. Facebook hopes that banks will share financial information about their customers on everything from card transactions to checking-account balances. The push comes amid Apple’s AAPL successful jump into financial services with Apple Pay, while Square SQ, PayPal PYPL, others expand in the mobile payment age.

Meanwhile, Mark Zuckerberg’s firm and other social media companies, including Snap (SNAP - Free Report) and Twitter TWTR, are coming under fire from the growing chorus of governments and citizens concerned about everything from fake news to cellphone addiction.

The French government recently went as far as to vote in favor of an official ban of cellphones at school. Lawmakers decided that students under the age of 15 must leave their cellphones at home, or at least have them turned off at school. Jean-Michel Blanquer, France’s education minister, said that the ban aims to remove distractions and encourage children to read or play outside of the classroom. Furthermore, he hopes the law can act as a symbolic message for the whole country to curb their smartphone use.

Investors should note that earlier this month Facebook and Instagram rolled out a series of initiatives aimed to let users feel like they have more control over how much time they spend on the platforms. Users can now set reminders to stop using Facebook or Instagram after a set amount of time, while also temporarily blocking notifications and logging their total time spent.

Zuckerberg has started to make an outward “time well spent” push because Facebook simply cannot afford for people to start leaving the platform, which is why the company has tried to combat its fake news problem, among other things. The company needs its users to feel that Facebook and Instagram provide real value to their lives in order for FB to continue its run of outsized success. 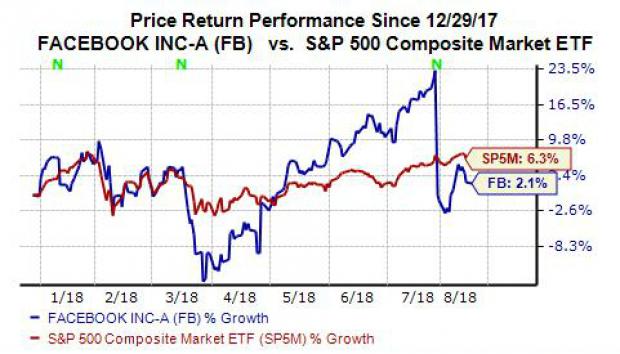 Facebook did see its quarterly revenues climb by 42% to hit $13.23 billion. But the company’s user growth numbers slowed, which was the main reason for FB’s historic selloff. FB saw its DAU totals in Europe fall from 282 million in Q1 to 279 million. Facebook also experienced a sequential decline in terms of MAUs in this key region.

Facebook closed the second quarter with 185 million DAUs in the U.S. and Canada, which marked roughly 1% growth and no sequential expansion. At 241 million, MAU’s were also flat from Q1 and up only 2% from the year-ago quarter. The company did grow in both its Asia-Pacific and the “Rest of the World” regions. But the U.S., Canada, and Europe generated roughly 72% of FB’s total Q2 revenues, while only accounting for approximately 28% of its total Monthly Active User base.

Therefore, Facebook can ill afford to see these regions plateau, much less experience more sequential declines, especially since advertising accounted for nearly 99% of its Q2 revenues—as it has for years. Advertisers aren’t likely to leave Facebook and Instagram anytime soon, with its standing among large advertisers elevated even more as the rise of Netflix NFLX makes consumers harder to reach through television.

But, Facebook’s DAUs grew just 1.5%, which marked its slowest pace on record. If the company’s user growth continues to slow, Facebook’s advertising revenues will follow because there are only so many ads FB can post without harming its user experience.

Facebook’s CFO David Wehner said on the company’s conference call that its operating margin is expected to fall to the "mid-30s on a percentage basis" over a more than two-year period. The company reported a second-quarter operating margin of 44%, which already marked its lowest point during the last five quarters.

Looking ahead, Facebook’s Facebook’s revenues are projected to climb roughly 34% to reach $13.83 billion, based on our current Zacks Consensus Estimate. Meanwhile, Facebook’s adjusted third-quarter earnings are expected to sink nearly 7%.

Plus, the company’s earnings estimate revisions have trended downward for Q3 and for fiscal 2018 and 2019, over the last 30 days to help give Facebook its Zack Rank #5 (Strong Sell). Therefore, investors might want to stay away from Facebook stock at the moment.

Home Depot (HD) Stock Sheds 1% Ahead of Earnings: What To Expect