Invest Like Buffett & Berkshire With These Top Stock Picks

Warren Buffett has for years been looked at as an investment icon, while maintaining a relatively simple mantra. Buffett and Berkshire Hathaway BRK.B have long tried to invest in companies that both the Oracle of Omaha and the conglomerate understand. This sounds easy enough, but what are some of Buffett’s most recent investments?

Berkshire upped its stake in Apple by 5% during the second quarter, according to its Tuesday regulatory filing with the SEC. Buffett’s company has beefed up its stake in the iPhone giant over the last two years to the point where Berkshire became Apple’s second-biggest shareholder—owning 4.96% of AAPL stock—as of March 31, behind only Vanguard.

Buffett for years avoided the tech sector, but he began to invest heavily in Apple, which included more than doubling Berkshire’s stake in the firm in early 2017. Berkshire raised its holdings of Apple stock by 12.4 million shares in the second quarter. The move lifted its stake in Apple to $46.6 billion as of the end of June.

The investment giant placed its faith in Apple because the company understood its business model and its consumer-facing tech products. Plus, Berkshire saw that Apple ran an extremely successful business. “If you look at Apple, I think it earns almost twice as much as the second most profitable company in the United States,” Buffett told CNBC in May.

Shares of Apple have soared roughly 80% since the start of 2017. Looking ahead, Apple’s fiscal fourth-quarter revenues are projected to climb by nearly 16% to hit $60.98 billion, based on our current Zacks Consensus Estimate.

At the other end of the income statement, Apple is expected to see its adjusted Q4 earnings surge by roughly 33% to hit $2.75 per share. Furthermore, Apple has earned nine earnings estimate revisions for Q4 over the last 30 days, with 100% agreement to the upside. Apple has also seen 10 full-year revisions during this same stretch, against zero downward changes, which helps it earn its Zacks Rank #2 (Buy). 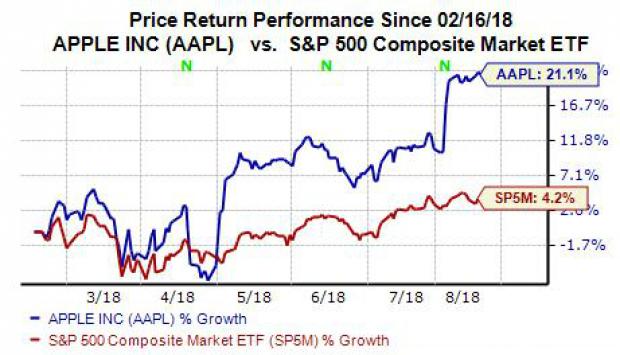 Berkshire upped its total holding in GS by 21% in a sign on confidence that Goldman is headed in the right direction. And it seems that Buffett’s bet looks more than justified. Goldman is projected to see its full-year revenues surge over 13.5% to hit $36.42 billion. Meanwhile, GS is expected to report adjusted fiscal year earnings of $24.98 per share, which would mark a more than a 26% climb from the year-ago period.

Goldman is also currently a Zacks Rank #2 (Buy) that has earned seven full-year upward earnings estimate revisions over the last 30 days, with 100% agreement to the upside.

Berkshire scooped up another 6.7% of Teva Pharmaceutical TEVA, after it doubled its holding in the company during the first quarter. The firm also upped its stake Delta DAL by 18.8% and Southwest Airlines (LUV - Free Report) by 18.7%, according to the filing.

The company dropped some of its shares in American Airlines AAL and United UAL. But investors should note that Berkshire aims to keep most of its holdings under a 10% threshold to avoid increased regulatory requirements.