Akonia’s flagship technology, HoloMirror enables the projection of full-colored images on AR headsets’ transparent glass lenses. The addition of this technology is expected to enhance Apple’s capabilities in the AR domain, which the company is looking to develop further.

Per recent data from IDC, the virtual reality (VR) and the AR headset market is anticipated to grow to 8.9 million units in 2018, showcasing a 6% increase from 2017. The same is expected to grow further and reach 65.9 million units by 2022.

It seems that Apple is quite interested in grabbing the growth opportunity. Apple’s ARKit is helping third-party developers to work on creating AR experiences for its iOS platform. The company has also acquired a bunch of start-ups including the likes of Metaio, Flyby Media and SensoMotoric to make the most of the business opportunities in the segment.

Notably, the company is looking to unveil its AR headset or device by 2020. We believe this will further aid the company’s financials as it has already crossed the $10 billion mark in revenues from wearables over the trailing four quarters.

The advancements in these segments are also expected to positively impact the company’s share price momentum going ahead. The stock has gained 31.8% in the year-to-date period, marginally outperforming the industry’s rally of 31%. 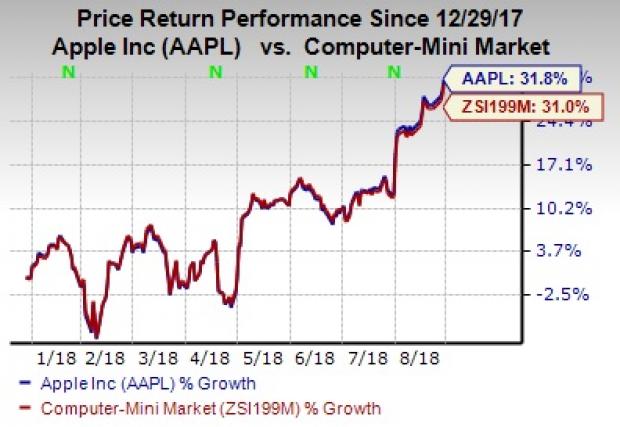 Apple is also focused on its primary revenue driver, iPhone. The company is anticipated to launch three iPhone models in 2018, prior to the holiday season. This in turn will drive the top line.

Additionally, the company is reportedly coming up with a new version of its laptop, MacBook Air. The laptop will have “thinner bezels around the screen.” The display will have a higher resolution Retina version and the screen will be around 13 inches.

Apple is also looking at upgrading its desktop, Mac mini with higher processing speed and improved storage. With the implementation of the plan, the desktop will get its first update since 2014.

All these initiatives ae expected to help this Zacks Rank #2 (Buy) company maintain its prominent position in the industry.

Zacks Research has released a report that may shock many investors. One stock stands out as the best way to invest in the surge to electric cars. And it's not the one you may think!

Much like petroleum 150 years ago, lithium battery power is set to shake the world, creating millionaires and reshaping geo-politics. Soon electric vehicles (EVs) may be cheaper than gas guzzlers. Some are already reaching 265 miles on a single charge. With battery prices plummeting and charging stations set to multiply, revenues that were already at $31 billion in 2016 are expected to blast to over $67 billion by the end of 2022.