AMD Stock Soared 11%, But Is Now Really the Time to Buy?

Advanced Micro Devices (AMD - Free Report) saw its stock price soar over 11% on Tuesday on the back of more positive analyst notes, which have pointed to the chip maker’s ability to grab market share from its rival Intel INTC. The question is: should investors consider buying AMD stock after it hit another new 52-week high?

The Upgrades & What’s Behind Them

Jefferies analysts reiterated their “buy” rating for AMD stock and raised their price target from $22 to $30 per share on Monday. “We see this as a foundational shift in competitive dynamics,” Jefferies analyst Mark Lipacis wrote in a note to clients. “Meanwhile, our checks also suggest that AMD continues to take share in high-end notebooks.”

Lipacis also said that he expects AMD to capture 12% of the server chip market in 2019, up from 8% in 2018. This growth projection stems from the fact that AMD is projected to have its 7-nanometer chips launch long before Intel rolls out it 10-nanometer chips, which are now expected to debut in late 2019.

Investors should note that one nanometer is equal to one-billionth of a meter, with the idea being that smaller nanometer chips are often more powerful. Jefferies said that the next year and a half will mark the first time in a while that AMD offers a chip with higher transistor density than Intel.

Along with Jefferies, Cowen on Monday lifted its AMD price target from $25 to $30 per share. The firm also reaffirmed its “outperform” rating, offering similar competitive advantage-based reasoning. Plus, last week analysts at Rosenblatt Securities raised their price target for shares of AMD from $27 to $30. Rosenblatt based its new AMD price target on the firm’s current advantages over Intel as well as Nvidia NVDA.

Tuesday’s surge is part of an insane run for the company. AMD has seen its stock price skyrocket 1,442% over the last three years, from under $2 per share in August of 2015. This growth crushes the likes of Amazon AMZN and Apple AAPL. Shares of AMD did go through a slow stretch during this time period, but have returned to impressive growth recently. AMD stock was up over 135% before Tuesday’s gains over the last six months, which crushes the S&P 500’s 7% jump and its industry’s 2.4% pop. 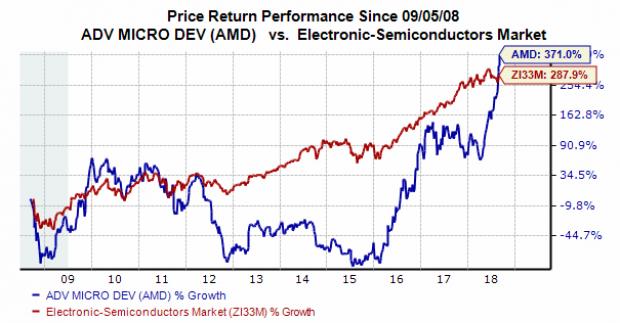 Moving on, AMD is currently trading at 50.9X forward 12-month Zacks Consensus EPS estimates, which marks an insane premium compared to the S&P’s 17.6X and its industry’s 12.1X average. Worse still, AMD stock has traded as low as 26X over the last year, with a one-year median of 39.6X. Therefore, AMD’s current valuation picture appears very stretched compared to where it has traded over the last year.

Looking ahead, AMD’s quarterly revenues are projected to pop by just under 4% to reach $1.71 billion, based on our current Zacks Consensus Estimate. For the full year, AMD’s top line is expected to hit $6.69 billion, which would mark a much more impressive 25.5% surge.

At the other end of the income statement, the firm is expected to see its adjusted quarterly earnings jump by 20% to reach $0.12 per share, while its full-year EPS figure is projected to skyrocket 176%.

AMD’s full-year growth projections appear rather impressive. However, shares of AMD have gone on a mind-blowing run over the last three years. Plus, AMD’s earnings revision activity has been relatively mixed over the last 60 days, which helps AMD land a Zacks Rank #3 (Hold). Therefore, investors might want to keep an eye on AMD stock for now and maybe wait for it to cool down a bit.

The Emerging Markets Currency Crisis: What Investors Should Know