5 Solid Dividend Stocks to Make Good in a Lousy September

A series of odds could easily derail the bull run this September. Topping the list is Trump’s threat to exclude Canada from a new NAFTA and his move to levy tariffs on Chinese goods starting this week. This is also the month when the Fed is set to hike rates, while investors grapple with the uncertainty of midterm elections.

September, traditionally, is a bad month for stocks and it actually gets worse in midterm election years. Given the widespread uncertainty, investing in dividend-paying companies seems practical as they provide steady earnings regardless of the state of the global equity market.

U.S. stocks started September on a somber note, as investors remained concerned about the latest developments on the trade front. The United States is about to begin trade negotiations with Canada that could very well change the NAFTA.

But, during the weekend, President Trump threatened to leave Canada out of the new NAFTA. He said that there was “no political necessity” to have Canada in the new NAFTA deal, something that has been challenged by Richard Trumka, president of the AFL-CIO.

Trumka categorically mentioned that NAFTA won’t work if Canada isn’t included and that the U.S.-Mexico deal structure remains too vague. Last week, both the United States and Canadian officials failed to reach an agreement to facelift the trilateral trade deal that includes Mexico to replace the 1994 NAFTA pact (read more: 4 Top Winners From the US-Mexico Trade Deal).

If this wasn’t enough, the United States could impose tariffs on almost half of all Chinese goods entering the country by the end of this week. Trump has proposed tariffs on $200 billion of Chinese products, to which Beijing retaliated with tariffs on another $60 billion of U.S. goods.

In about a month’s time midterm elections will be held in the United States. This could be a game changer for both the government and the stock market should the Democrats regain a majority in the House of Representatives, the Senate, or both. Such a divided government raises political instability, threats of impeachment and more government shutdowns, which could be a risk to the broader market.

In fact, strategists are saying that a look at the historical performance shows that stocks see more volatility in the September that features midterm elections. In the last 11 midterm election years, the S&P 500 mostly traded flat through September only to rally once political uncertainty waned, per The Goldman Sachs Group, Inc. (GS - Free Report) . In those years, stock market volatility averaged 15% compared with the median of 12% in all years. 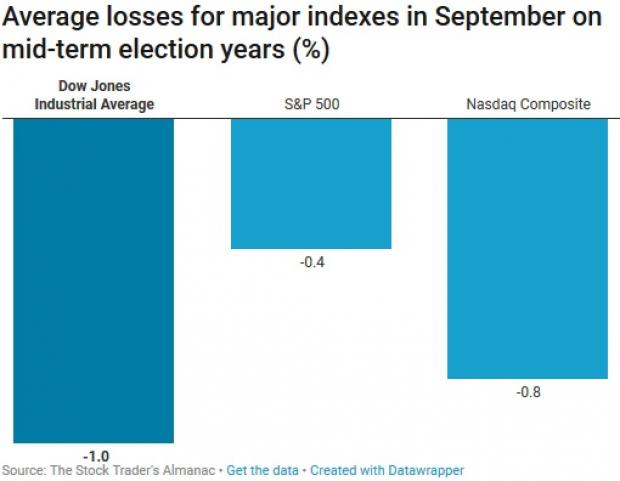 Sell in May and Go Away

And how can we forget the historical trend embodied by the phrase “sell in May and go away.” Investors are encouraged to sell stock holdings in May to avoid getting affected by the seasonal decline in equity markets. The strategy also involves getting back into the equity markets in November, thereby evading the typical volatile May-October period. Traditionally, stocks have underperformed in the six-month period starting May and ending in October, compared to the six-month period from November to April.

Volatility, as a matter of fact, has risen as we enter what’s traditionally been the rockiest month of the year for stocks. The market’s so-called fear gauge, CBOE Volatility Index, rose as much as 9.5% on the first day of trading in September.

Due to the aforementioned factors, September is certainly cast into uncertainty. This calls for investing in dividend paying stocks which boast immense financial strength and are immune to market vagaries. Such stocks reflect solid financial structure, healthy underlying fundamentals and better quality business. They have also raked in excellent risk-adjusted returns this year.

Hence, we have selected five such dividend paying stocks to boost your returns. Such stocks also possess a Zacks Rank #1 (Strong Buy). You can see the complete list of today’s Zacks #1 Rank stocks here.

Ladder Capital Corp (LADR - Free Report) operates as a real estate investment trust in the United States. The Zacks Consensus Estimate for its current-year earnings advanced 6.4% over the last 60 days. The company’s expected earnings growth rate for the current quarter is 17.1%, compared with the REIT and Equity Trust industry’s projected decline of 6%.

JMP Group LLC provides investment banking, sales and trading, equity research, and asset management products and services in the United States. The Zacks Consensus Estimate for its current-year earnings surged 54.5% over the last 60 days. The company’s expected earnings growth rate for the current quarter is 30%, compared with the Financial - Investment Bank industry’s estimated rally of 15%.

Alliance Resource Partners, L.P. (ARLP - Free Report) produces and markets coal primarily to utilities and industrial users in the United States. The Zacks Consensus Estimate for its current-year earnings increased 5.8% over the last 60 days. The company’s expected earnings growth rate for the current quarter is 40.4%, compared with the Coal industry’s expected fall of 83.6%.

CONSOL Coal Resources LP : This company produces and sells high-Btu thermal coal in the Northern Appalachian Basin and the Eastern United States. The Zacks Consensus Estimate for its current-year earnings climbed 18.6% over the last 60 days. The company’s expected earnings growth rate for the current quarter is a whopping 342.9%, compared with the Coal industry’s estimated decline of 83.6%.