Harris Corporation HRS recently announced that as part of the U.S. Army’s two-channel Leader radio indefinite delivery/indefinite quantity (IDIQ) contract, it has secured orders for 1,540 AN/PRC-163 two-channel handheld radios & related equipment and services. The AN/PRC-163 is the most advanced software-defined handheld radio in the world today, providing warfighters and commanders with unprecedented capabilities like enhanced levels of command & control and situational awareness.

Notably, the Harris AN/PRC-163 Army Radio is a versatile and secure two-channel solution that provides simultaneous up-and-down-echelon connectivity, cross-banding capability, and critical interoperability and redundancy in a small form factor. It can simultaneously transmit and receive information by leveraging both the channels. With both channels allocated as low and high-band, overlapping Ultra High Frequency (UHF) and Satellite Communications (SATCOM) availability, it offers flexibility in any combination of SATCOM, VHF/UHF Line-Of-Sight and Mobile Ad-Hoc Networking applications.

The latest contract also extends Harris’ leadership in software-defined tactical communications and builds upon the company’s proven ability to engineer and deliver two-channel, next-generation handheld, manpack and vehicular radios. It was previously awarded contracts by the U.S. Special Operations Command for next-generation handheld and manpack radios. The company has been an Army mission partner for about 60 years, providing technologies that enable the connected battlefield. Harris has delivered more than 1 million tactical radios to warfighters around the globe and participates in all major U.S. tactical radio modernization initiatives.

Such contract wins will likely enhance the company’s top line, which witnessed a compound annual growth rate of 16.7% from fiscal 2015 to fiscal 2018.

Over the past three months, shares of Harris have gained 13.2% compared with 14.1% growth for the industry. 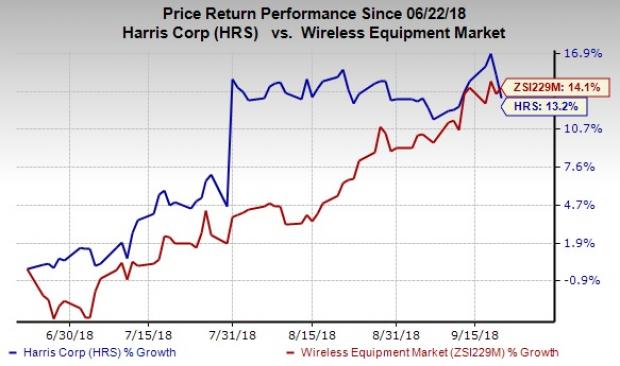 Ribbon Communications has a long-term earnings growth expectation of 12%. It beat earnings estimates in each of the trailing four quarters, the average surprise being 168.1%.

Clearfield beat earnings estimates in each of the trailing four quarters, the average surprise being 52.8%.

QUALCOMM has a long-term earnings growth expectation of 10.9%. It beat earnings estimates in each of the trailing four quarters, the average surprise being 19.8%.