Masco Corporation (MAS - Free Report) reported third-quarter 2018 results, wherein earnings and revenues missed the Zacks Consensus Estimate. The bottom line missed the consensus mark for the third straight quarter and the top line lagged the same in the quarter under review after beating estimates in the trailing three quarters. Notably, Masco trimmed its earnings guidance primarily due to softness in DIY paint and international markets, along with commodity and logistics cost pressures. 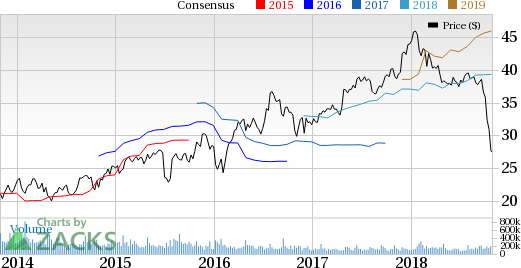 The company’s performance was backed by strong sales from North American Plumbing and Cabinetry Products. However, DIY paint and international markets marginally overshadowed the gain. Also, commodity and logistics costs added to the woes.

As a percentage of net revenues, selling, general and administrative expenses were 17.5%, lower than 17.9% reported in the prior-year quarter.

Plumbing Products: The segment recorded revenues of $992 million, reflecting an increase of 4% from a year ago. Excluding the impact of foreign currency translation, revenues increased 5% backed by 9% growth in North America.

Decorative Architectural Products: The segment revenues summed $673 million, up 20% year over year, attributable to the Kichler acquisition as well as growth in Behr’s pro initiative and builders’ hardware. The positive impact was partially offset by lower DIY paint sales. Excluding the impact of acquisition, revenues increased 1%.

Cabinets and Related Products: Revenues from the segment totaled $239 million, which increased 4% year over year. The improvement was owing to solid growth in the repair and remodel business, partially overshadowed by the divestiture of Moores. Excluding the impact of divestiture, revenues increased 11%.

Adjusted operating margin was 9.6% in the quarter, up 90 bps.

Windows and Other Specialty Products: The segment’s revenues amounted to $197 million, down 3% year over year primarily due to lower international sales.

Moreover, the company repurchased $2.3 million shares in the quarter.

Following the quarterly results, management has lowered its guidance for 2018. The company now expects adjusted earnings per share in the range of $2.39-$2.44 compared with earlier guidance of $2.48-$2.55 per share.

Notably, the company intends to repurchase approximately $300 million shares in the fourth quarter.

Nova (NVMI) to Report Q3 Earnings: What's in the Offing?