Should Investors Worry About Apple (AAPL) Stock After Disappointing Q4?

Shares of Apple (AAPL - Free Report) fell over 6% through early morning trading Friday just one day after it reported some better-than-expected Q4 results. But Apple fell short of some key segment estimates and said it would stop breaking down iPhone unit sales. Now, the question is should investors be nervous about Apple going forward, or is this simply the start of the iPhone power’s next phase?

Apple saw its total quarterly revenues climb 20% to reach $62.9 billion, which topped our $61.49 billion Zacks Consensus Estimate. Meanwhile, Apple’s adjusted quarterly earnings soared 41% to $2.91 per share and came in above our $2.79 per share estimate.

Apple’s impressive earnings growth was driven, in part, by stock buybacks. The tech powerhouse said that it returned over $23 billion to shareholders in dividends and share repurchases in the fourth quarter. This helped bring Apple’s total capital returns in fiscal 2018 to nearly $90 billion.

On top of that, international sales made up roughly 61% Apple’s total quarterly revenues. Sales in Japan hit $5.161 billion, which was by far Apple’s largest regional jump from the year-ago period, up 34%. The “Rest of Asia Pacific” area saw 22% growth, while sales in Greater China jumped 16% to reach $11.411 billion. Sales in the Americas climbed by the second-largest amount at 19% to hit $27.517 billion.

Moving on, iPhone unit sales once again stood out as microscopic growth becomes the norm. Apple’s total iPhone unit sales climbed less than 0.5% from 46.677 million to 46.889 million, which also missed our NFM estimate of 46.954 million.

Despite marginal unit sales expansion, iPhone revenues surged 29% from $28.846 billion in the year-ago quarter to $37.185 billion. Overall iPhone sales were once against driven by higher prices to help Apple beat our $35.651 billion estimate. Last quarter, smartphone revenues popped 20% to reach $29.906 billion even as unit sales inched up less than 1%.

Apple also seemed to signal that iPhone sales will never return to their former growth when it announced that it will no longer break down iPhone unit sales. “The Street will find this a tough pill to swallow this morning as the transparency of the Cupertino story takes a major dent given that tracking iPhone units has become habitual to any investor that has closely followed the Apple story for the last decade or more and is critical to the thesis,” Wedbush Securities analyst Daniel Ives wrote in a note to clients.

With that said, Apple’s services business had been a catalyst for investors recently as the firm expands beyond its flagship product that helped it become a trillion dollar firm. But the fourth quarter marked a significant slowdown for this previously booming segment.

Services revenue climbed 17% from $8.501 billion to reach $9.981 billion in Q4. This represented a significant drop from Q3’s 31% jump and the year-ago period’s 34% expansion. Worst still, our NFM estimates projected services revenues would pop 24% to reach $10.546 billion. 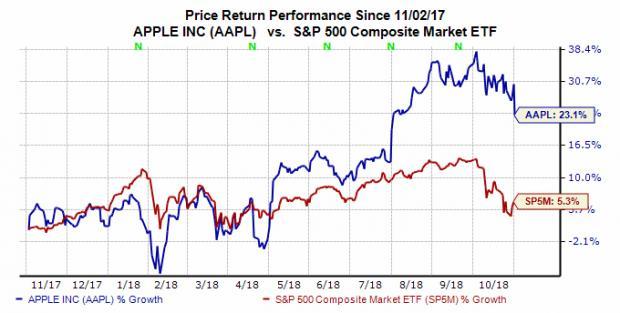 Clearly, Apple’s fourth quarter was not what many investors had hoped for. And looking ahead might make investors even less pleased. The company is projected to see its Q1 revenues climb just 3.4% to hit $91.32 billion, based on our current estimate.

Plus, Apple’s fiscal 2019 revenues are only expected to pop 5.18%. This helps show that strong iPhone revenue growth driven by new, higher priced phones seems unlikely to continue with a full year of iPhone X sales to compare against. It is also worth noting that Apple’s adjusted fiscal 2019 earnings are projected to climb only 13.52% after a buyback fueled 2018.

Investors have known for some time now that Apple’s iPhone unit growth was going to eventually stagnate as the law of large numbers and market saturation became more pronounced. But at least Apple was relatively straightforward and let shareholders know that it’s time to look for new signs of strength.

It seems unclear what AAPL stock will do in the near-term, and there are obviously reasons for concern. Luckily, Apple is ready to jump into the streaming TV market to battle Netflix (NFLX - Free Report) , Amazon (AMZN - Free Report) , and Disney (DIS - Free Report) . However, Apple’s days of 20% top-line growth might be over for the foreseeable future.