CDW Q3 Earnings Gain From Solid Growth Across All Verticals

CDW Corporation (CDW - Free Report) is benefiting from strong sales growth, driven by gains in all its customer markets. The company’s broad-based product and solutions portfolio is a key growth driver. The company’s recently released third-quarter results bear testimony to the fact.

Revenues for the quarter came in at $4.37 billion, marking a year-over-year jump of 11.2% and topping the Zacks Consensus Estimate of $4.24 million. Revenues were up 11.4% in constant currency (cc).

Moreover, the company expects healthy IT spending environment and strong employment levels to continue to drive demand for its product and services, which in turn will aid its top-line growth.

Shares of CDW have gained 26.2% year to date, significantly outperforming the industry’s rally of 10.4%. 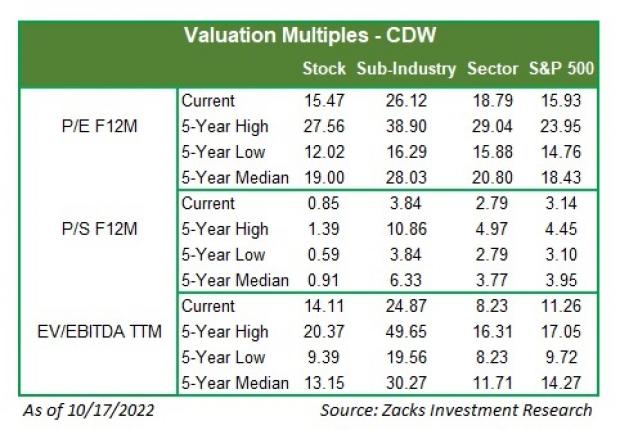 A Look at Q3 Results

CDW’s Corporate net sales of $1.7 billion registered nearly 10% growth on a year-over-year basis.  The results were driven by customer refresh of client devices, which was backed by strong economic growth and full employment. During the quarter, client devices increased more than 20%. However, Corporate solution sales were flat in the quarter as mid-teens growth in two end markets was offset by softness in the other two end markets.

Coming to Public segment, net sales of $1.89 billion increased 10.7% from the year-ago quarter as all three customer channels performed well. Revenues from Government increased 8% to $639.3 million with federal service revenues growing in the mid-teens. The result seems encouraging, given the tough year-over-year comparison the company had been facing owing to the Department of Defense’s Windows 10 upgrade in the prior year.

Net sales to Healthcare customers increased 7.8% to $442.7 million, reflecting that customers moved past uncertainty related to reimbursements and funding.

Net sales in Other increased 18.5% to $451.6 million. Other comprises results from the company’s Canadian and UK operations. Management noted that investments made in adding technical coworkers in Canada helped boost solutions growth that was twice as fast as transactions. Moreover, sales to the UK government more than doubled owing to the company’s investment in building a team to cater to the needs of UK central government.

Moreover, CDW witnessed solid performance across hardware, software and services, all posting double-digit growth. Hardware growth of 10% was fueled by both transactions and solutions. Software increased 11% while Services grew 12%.

CDW’s gross profit of $713.6 million increased 11% on a year-over-year basis. However, gross margin of 16.3% remained flat year over year.

The company reported adjusted EBITDA of $355 million, which increased 9.3% from the prior year quarter. Adjusted EBITDA margin for the quarter declined 20 basis points (bps) to 8.1%.

CDW exited the quarter with cash and cash equivalents of $255.1 million, up from $100.7 million at the end of the previous quarter.

The company has a long-term debt of $3.19 billion.

The company generated $602.3 million of cash flow from operational activities in the first three quarters. Free cash flow was $459 million during the same time frame.

The company also announced a quarterly cash dividend of 30 cents per share to be paid in December 2018.

CDW anticipates 2018 revenues to grow 425 bps more that U.S. IT market's expected growth of 4.25%. The company has increased guidance by 50 bps for both.

Management reiterated its adjusted EBITDA margin of high-7% to 8%.  For 2018, CDW expects the bottom line to grow at more than 30% in cc compared with 20% expected earlier.

Long-term earnings growth for Intel, Twitter and CACI International is projected to be 8.4%, 22.1% and 10%, respectively.