A few growth drivers and certain headwinds, which might influence United Technologies, have been discussed below.

Financial Performance & Bottom-Line Outlook: United Technologies have been delivering impressive results for quite some time now. The company’s average earnings surprise for the last four quarters was a positive 8.23%. This average includes the impact of 6.63% earnings beat recorded in the third quarter of 2018. Further, the bottom line expanded 11.6% on the back of solid sales growth and greater operational efficacy.

In the past 60 days, earnings estimates on the stock for 2018 have been increased by six brokerage firms. Currently, the Zacks Consensus Estimate for earnings is pegged at $7.27 for 2018, reflecting growth of 0.8% from the 60-day-ago tally. Moreover, bottom-line estimates represent year-over-year growth of 9.3% for 2018.

Further, the company’s earnings in the next three to five years are projected to grow 8.8%.

In the past month, United Technologies’ shares have yielded 1.3% return against 3.1% decline recorded by the industry. 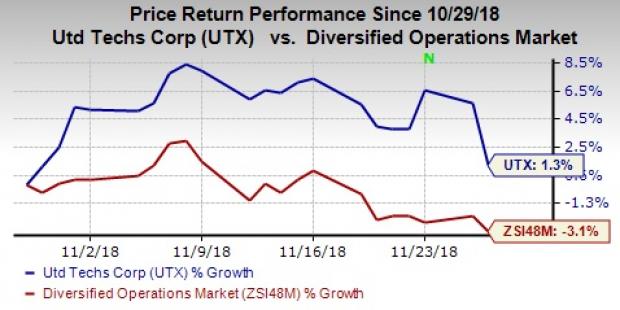 The company’s organic sales expanded 8% in the third quarter of 2018. Aerospace business gained primarily from rise in global air traffic, military programs and passenger load factor. On the other hand, rise in infrastructure spending in China, urbanization in Asia, construction activity in the United States, and demand for refrigeration and HVAC products aided Commercial operations.

For 2018, United Technologies anticipates these positive aspects to support top-line growth. Notably, organic sales in the year are predicted to be roughly 6%. Total revenues are anticipated to be $64.5-$65 billion, higher than $64-$64.5 billion mentioned earlier. The $0.5-billion increase in sales guidance is due to the Rockwell Collins buyout. Excluding this increment, the projection of $64-$64.5 billion is higher than $59.8 billion generated in 2017.

Currently, the Zacks Consensus Estimate for revenues on the stock is pegged at approximately $64.8 billion for 2018 and $72.6 billion for 2019, reflecting year-over-year growth of 8.4% and 12%, respectively.

Business Restructuring Initiatives: The recently acquired Rockwell Collins assets, together with United Technologies’ UTC Aerospace Systems, have formed a new unit named Collins Aerospace Systems. This new unit will be a global leader in providing mechanical, electrical, and software solution to the military and commercial aviation industry. For 2019, the company anticipates the Rockwell Collins buyout to boost earnings per share by 15-20 cents and add roughly $500-$750 million to free cash flow. Further, cost synergies before tax (run-rate) of over $500 million is predicted by the fourth year.

In addition to these, the company intends to separate its businesses into three independent companies — United Technologies, Otis and Carrier. While United Technologies will comprise of the businesses of Collins Aerospace Systems and Pratt & Whitney; Otis and Carrier will continue with their existing operations. The three businesses will have solid innovation capabilities, create greater value for customers and be better equipped to offer customized solutions to customers.

Rising Costs and Expenses: In the third quarter of 2018, United Technologies recorded 12.9% increase in the cost of sales due to rise in logistics expenses and material cost inflation. Further, operating expenses in the quarter increased 4.3%. In the last five years (2013-2017), the company’s cost of sales increased 1.7% (CAGR). We believe that unwarranted rise in costs and expenses are likely to prove detrimental to the company’s margins and profitability.

Headwinds From Currency Translation: Geographical diversification is reflective of a flourishing business of United Technologies. However, this diversity exposed it to headwinds, arising from geopolitical issues and unfavorable movements in foreign currencies. The company predicts that forex woes are likely to have an adverse $100-million impact on segmental operating profits.

Troubles in Otis Segment: In the third quarter of 2018, revenues at the Otis segment suffered from weakness in Korean operations and unfavorable movements in foreign currencies. Top-line problems, along with high material and labor costs, impacted the segment’s margin in the quarter. The company’s pricing actions will fail on covering the impact of increase in costs in the near term. For 2018, it predicts operating profit at the Otis segment to fall roughly $75 million.

In the past 60 days, bottom-line estimates on the stocks improved for the current year. Further, earnings surprise for the last reported quarter was a positive 111.90% for HC2 Holdings and 11.72% for Crane.