In the past five trading days, telecom stocks initially faltered as President Trump renewed threats to impose higher tariffs on China, but gained momentum thereafter as the Federal Reserve chairman Jerome Powell indicated a slower approach to increasing interest rates. This soothed investor nerves and stocks appeared to have an unhindered ascent.

Just days before the proposed meeting with his counterpart in China, at the G20 summit in Buenos Aires, Trump dropped broad hints that he would increase the tariffs on $200 billion of imports from the Communist nation, while also slapping duties on additional items on the import basket if no fruitful negotiation is amicably reached. Although some critics attributed this rhetoric to a possible ploy by the Trump administration to strengthen its case for favorable trade negotiations, telecom stocks (which until now were mostly unaffected by the earlier set of tariffs) declined on concerns of the fallout.

The U.S. officials even reached out to allied countries, in an effort to persuade them from refraining to use Huawei telecom equipment, accusing it of sophisticated and intensified cyberattacks to siphon off data for possible collection and analysis. The fresh allegations against the leading Chinese telecom manufacturer are a lead up of heighted scrutiny over perceived risk of espionage. This has further amplified the tensions between the two warring countries and weighed on the stocks as well.

Just when it appeared that the stocks would have a free fall, a timely intervention by the Fed calmed investor sentiments. Despite the Federal Open Market Committee, the Fed’s policy-making body, raising the federal funds rate three times this year, Powell indicated a dovish stance with reference to future rate hikes. He dropped hints that the Fed would apply a relatively slower-than-anticipated approach to increasing interest rates in the near future. On the cue, stocks witnessed a steep climb and allayed investor fears.

Regarding company-specific news, strategic collaborations, 5G deployment and product launches took the center stage over the past five trading days.

1.    Nokia Corporation NOK has announced that it has inked a patent licensing agreement with OPPO Electronics Corporation, commonly referred to as OPPO, a consumer electronics and mobile communication firm based in China. The terms of the multi-year agreement were, however, kept undisclosed from public domain.

Per the deal, OPPO would make fixed payments to Nokia over the license period. This would ensure a steady revenue stream for the company and likely have a positive impact on its balance sheet as money from patents is mostly profit. The company holds a significant number patents related to GSM, 3G radio and 4G LTE technologies. In addition, Nokia has patents related to Wi-Fi and video standards, as well as technologies that reduce the need for hardware components in a phone, improve radio reception, and enhance battery life. (Read more: Nokia Inks Multi-Year Patent Licensing Agreement With OPPO)

2.    Verizon Communications Inc. VZ recently announced that it has inked a definitive agreement with the Agfa-Gevaert Group (Agfa), for an undisclosed amount, to revamp the global network infrastructure of the latter. The strategic deal will enable the Belgium-based digital imaging products manufacturer to better serve its customers across the globe.

Per the agreement, managed network services and software-defined networking solutions of Verizon Enterprise Solutions will facilitate a radical transformation of Agfa’s network infrastructure. This, in turn, will help deliver a flexible, scalable and agile global infrastructure that will ease the transition to state-of-the-art technologies to fuel future growth. (Read more: Verizon to Transform Agfa's Global Network Infrastructure)

3.    Continuing its rich legacy of designing high-end optical systems, Harris Corporation     recently delivered the largest mirror ever for a ground-based observatory in order to produce the deepest and widest views of the universe. The company is part of the National Science Foundation team assembling the Large Synoptic Survey Telescope (LSST) on the Cerro Pachón ridge in Chile.

Notably, the Harris-built secondary mirror for LSST meets challenging requirements. Harris is in charge of providing the 3.5 meter, 3,500-pound secondary mirror and related ground support equipment. It is also slated to deliver the cell assembly that stabilizes the mirror to offset the effects of gravity during operation, which is set to begin in 2022. While the mirror will enable scientists to take more than 800 panoramic images of the sky every night, the telescope will identify potentially hazardous asteroids and new solar systems. (Read more: Harris Ships Largest Mirror for Ground-Based Telescope)

4.    In an effort to outstrip competition from rival players while launching its mobile 5G network across multiple U.S. markets in the first half of 2019, Sprint Corporation S announced that it has joined forces with HTC to bring a powerful 5G mobile smart hub to customers. This breakthrough device will enable customers to experience Sprint 5G on multiple devices for content sharing, mobile gaming and entertainment among others, with incredibly fast connectivity.

Notably, this state-of-the-art gadget is the second product designed for Sprint’s mobile 5G network and is expected to deliver multimedia and connected data capabilities in a compact and portable manner. It has been developed from collaboration among Sprint, HTC and Qualcomm Technologies, Inc., a subsidiary of QUALCOMM Incorporated QCOM. With a Qualcomm Snapdragon mobile platform using the Snapdragon X50 5G modem, the device features Gigabit LTE and 5G capabilities for ultra-fast data speeds. (Read more: Sprint & HTC to Bring 5G Mobile Smart Hub in First-Half 2019)

5.    Windstream Holdings, Inc. WIN has announced that it is working to expand the number of network on ramps to cater to customers’ requirements of dedicated connectivity to third-party cloud service providers (CSPs).

Notably, this will enable customers to choose any network connection from Windstream to create a dedicated, high-speed, vastly secure cloud-optimized network connection to major CSPs — including Amazon.com, Inc.’s Web Services, Microsoft Corporation’s Azure, and Google Cloud. As a matter of fact, the expansion will enable customers to access key markets like Texas Phoenix and Las Vegas, as well as cities in Silicon Valley. (Read more: Windstream Announces Expansion of Cloud Connect Network) 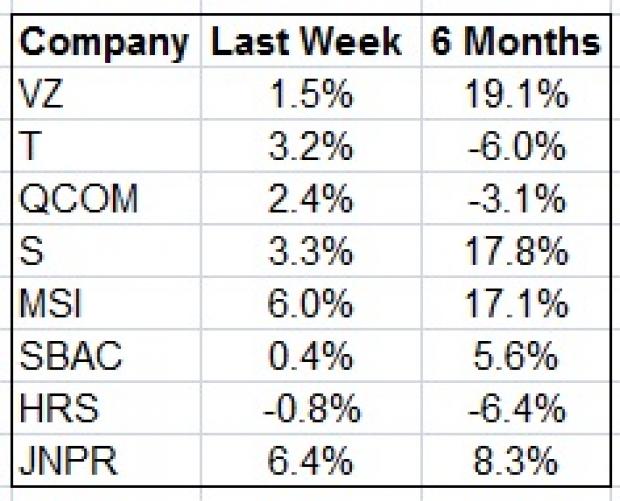 In the past five trading days, Juniper Networks, Inc. JNPR was the biggest gainer, with its share price increasing 6.4%. Harris was the only decliner, with its stock losing 0.8%.

Over the past six months, Verizon has been the best performer, with its stock appreciating 19.1%, while Harris declined the most, with its shares falling 6.4%.

Over the past six months, the Zacks Telecommunications Services industry gained 4%, while the S&P 500 rose 0.7%.

In addition to continued product launches and deployment of 5G technologies, all eyes will remain glued to how the United States and China approach the G20 summit amid hints of possible start to negotiations for the prevailing trade war.

Why Should You Add Air Products (APD) to Your Portfolio?