Reasons for the Fall

The Honolulu, HI-based carrier lowered projection for fourth-quarter 2018 with respect to revenue per ASM (RASM) due to sluggish demand in its Neighbor Island network, especially to Hawai'i Island, as well as weak market pricing on the North America routes. The company anticipates the metric to decline in the range of 3-5% year over year compared with the previous guidance of a down 2.5% to up 0.5%. Despite a lower rate than industry’s capacity growth, traffic growth from North America to Hawai'i is projected to be steady.

The damage was not limited to Dec 7. In fact, shares of the company have lost 24% in a year’s time compared with the industry’s 18.3% decline. 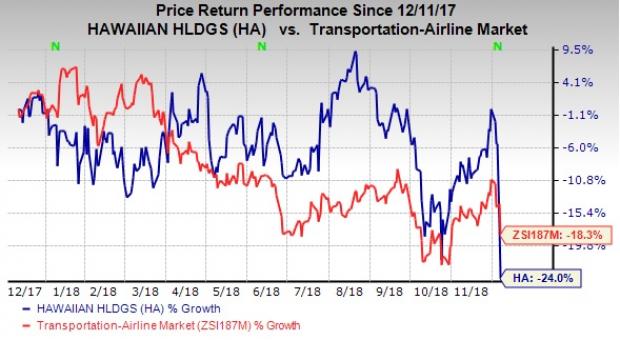 Let’s delve into the factors causing this downtrend.

Despite the current downtrend in oil prices, fuel costs are a major headwind for the company. As was the case in the previous few quarters, fuel costs are expected to mar the bottom line in the fourth quarter. Fuel cost per gallon (economic) is anticipated in the band of $2.20-$2.30 in the final quarter. The metric is projected in the range of $2.05-$2.15 for 2018.

The fact that Southwest Airlines Co. (LUV - Free Report) intends to start flights to Hawaii at lower fares will increase competition for Hawaiian Holdings. Although the dates for commencement of flights have not yet been officially announced, Southwest Airlines initially decided on four destinations, namely Honolulu (island of Oahu), Kahului (Maui), Lihue (Kauai) and Kona (Hawaii's “Big Island"). Such efforts might pose a challenge for Hawaiian Holdings, since growth for any airline stock is backed by strong demand for air travel. The carrier’s price performance might be significantly hurt, thanks to decline in the company’s market share.

Shares of Frontline and Air France have gained 22.5% and 26.4% in the past six months, respectively.