Over the years, the largest U.S. wireless carrier by subscribers, has spurred technological innovation and economic development, including introduction of mobile data and making the ecosystem more pervasive with 4G LTE. The company believes that what happened with 4G was small compared to the possibilities that 5G era holds. It is also looking to slash costs as it ramps up investment in next-generation 5G network, which is expected to fuel growth.

5G is dubbed as the technology of the future with faster download speed and seamless transfer of data. This radical technology brings to the table three new aspects for the overall improvement of the telecom space, namely, greater speed, lower latency and the ability to connect to more devices at once. It is touted to be the primary catalyst for next-generation Internet of Things services, including connected devices, augmented reality and virtual reality platform that revolutionize key industry verticals. Verizon expects solid traction to capitalize on the impending 5G boom and outsmart competitive pressure.

With one of the most efficient wireless networks in the United States, Verizon continues to deploy the latest 4G LTE Advanced technologies to deliver faster peak data speeds and capacity for customers, driven by customer-focused planning, disciplined engineering and constant strategic investment. The company has been aggressively moving ahead to expand its fiber optics networks to support 4G LTE and 5G wireless standards. Management is bullish on the industry's ability to grow revenues from deeper penetration of smartphones and cloud computing. We remain confident that the company is poised to gain solid traction from the 5G era.

Owing to operational efficiency, the stock has returned 7.1% against a decline of 2.2% for the industry in the past six months. 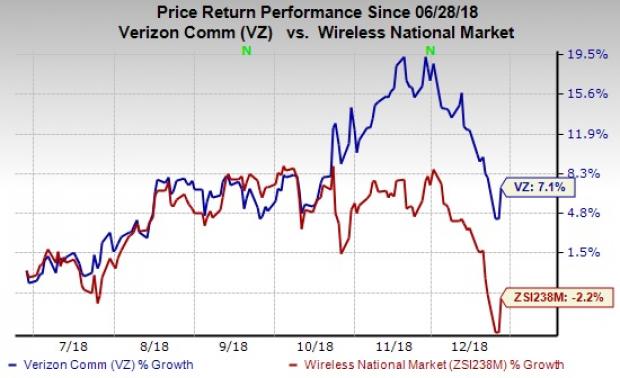 Hi-Crush (HCLP) Stock Down 67% YTD: Is a Turnaround Possible?