Shares of Tesla (TSLA - Free Report) bounced back Friday after two down days to start 2019 after it missed fourth-quarter Wall Street delivery and production projections. Other giants, including Apple (AAPL - Free Report) , recovered as well on the back of a better-than-expected jobs report. So, let’s see what investors should expect from TSLA in 2019 as it aims to expand in China and Europe.

Tesla announced on Wednesday that it delivered 90,700 vehicles in the fourth quarter, which marked 8% growth from Q3’s all-time high. The company delivered 13,500 Model S, 14,050 Model X vehicles, and 63,150 Model 3 sedans—up from a total of just 1,542 a year earlier and 13% from last quarter. Despite Tesla’s overall Q4 strength, the company fell slightly short of Wall Street estimates, which led to Wednesday and Thursday’s selloff.

Increased Model 3 production helped drive Tesla’s impressive growth after it had struggled to churn out its less expensive sedan during the first half of last year. Tesla also said it boosted production in Q4 to 86,500 vehicles, up from 80,142 during the third quarter.

Tesla sees room for even more growth in 2019 as it tries to expand far beyond North America. Investors should note that Q4 Model 3 deliveries were limited to mid- and higher-priced variants to North American customers only. “There remain significant opportunities to continue to grow Model 3 sales by expanding to international markets, introducing lower-priced variants and offering leasing,” Tesla wrote in a company release. “International deliveries in Europe and China will start in February 2019.”

Tesla tweeted out Friday that customers in left-hand drive countries in Europe can now configure the Model 3. Meanwhile, deliveries in right-hand drive markets like the UK are set to begin in the second half of 2019.

Investors should also note that the EV powerhouse added over 3,100 Supercharger stations around the world in 2018. The company claims that its network currently covers 99% of the U.S. population and 97% of Europe, and “will continue to grow in 2019.”

Musk’s company also said on Friday that it aims to begin delivering the Model 3 to customers in China by March. This helped confirm the time frame CEO Elon Musk tweeted about late last year.

On top of international expansion, Tesla announced that it aims to greatly improve its logistics network in North America to help the company get vehicles to its customers more quickly. Plus, Tesla lowered the price of its Model S, Model X, and Model 3 vehicles in the U.S. by $2,000 to help offset the reduction of the federal EV tax credit.

The credit dropped from $7,500 to $3,750 as of January 1. This is part of the reason that Tesla stock fell Wednesday and Thursday. But now seems like as good of time as any to adjust prices with the EV tax credit eventually set to hit zero by next year. Plus, greater affordability could eventually help Tesla sell far more vehicles. 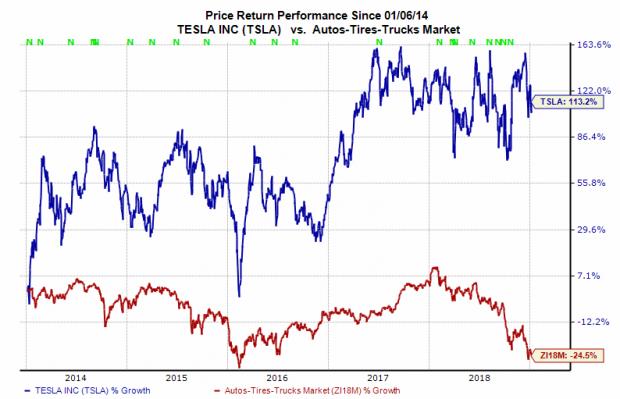 Shares of TSLA popped over 4% through early afternoon trading Friday to hit $312.74 a share. This marked a roughly 19% decline from its 52-week high of $387.46 per share and sets up what could be a solid buying opportunity for those high on Tesla.

Looking ahead, our current Zacks Consensus Estimate calls for Tesla’s Q4 revenues to skyrocket 114% from the prior-year period to reach $7.04 billion. We should note that this estimate could change based on Tesla’s recently-released fourth quarter production and delivery figures.

Moving onto the bottom end of the income statement, Tesla’s adjusted Q4 earnings are projected to skyrocket 168% from a quarterly loss of $3.04 per share in the year-ago quarter to hit $2.08 a share. Tesla is still expected to report a full-year loss of $1.23 per share. But peeking further ahead, Tesla is projected to post adjusted earnings of $5.92 per share in fiscal 2019, which would mark a 581% climb from our fiscal 2018 projection.

Tesla clearly has plenty of room to grow, especially when we consider that the electric vehicle revolution has barely started.