Here's What to Expect from Nvidia (NVDA) Stock in 2019

Nvidia (NVDA - Free Report) stock has plummeted 46% over the last three months as part of the broader market downturn, driven by giants like Apple (AAPL - Free Report) . But shares of NVDA did surge Monday, along with AMD (AMD - Free Report) and Micron (MU - Free Report) . So, is Nvidia due for a 2019 comeback after its late-year tumble on the back of slowing revenue growth? Let’s see what investors should expect from Nvidia in 2019 to find out.

Nvidia is coming off a disappointing third quarter that saw its revenues fall short of estimates despite climbing 21%. More importantly, the chip power’s Q4 top-line outlook of $2.70 billion came in well below Wall Street’s $3.40 billion estimate. NVDA’s revenues suffered as cryptocurrency mining-based demand for its GPUs fell for the second quarter in a row.

With that said, Nvidia’s insane, roughly three-year climb would have made it extremely hard to continue to impress investors. Therefore, it seems that NVDA stock was bound to hit a correction, and it happened to coincide with the broader market downturn that hit everyone from Amazon (AMZN - Free Report) to Alphabet (GOOGL - Free Report) .

Nvidia saw its stock price jump 6% through late-afternoon trading Monday to reach roughly $144 a share. This still marked a 50% downturn from its 52-week high of $292.76 per share and sets up what could be a solid buying opportunity for NVDA. 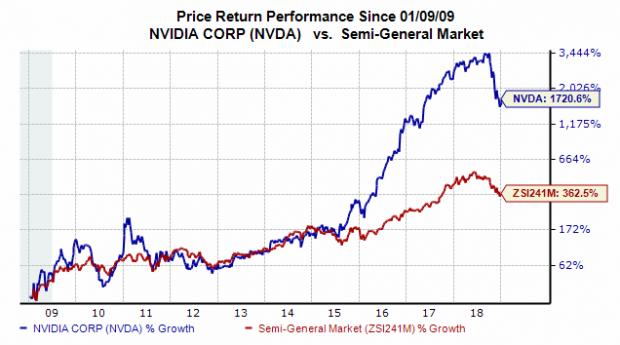 The company is still a leader in cutting-edge graphics chips that help create more life-like video games. Despite its recent decline, Nvidia’s chips also help power datacenters, and the company is set to benefit from the growth of cloud computing, artificial intelligence, and machine learning. And Nvidia launched its new Turing GPUs, which CEO Jensen Huang called his company’s “most important innovation in computer graphics in more than a decade,” in 2018 after nearly two years of anticipation.

Plus, Nvidia and Huang just said on Sunday that the firm is set to release a new, lower-priced version of its newest Turing-based graphics cards, called the RTX 2060. The firm also made a series of other announcements at an early CES news conference.

Moving on, investors likely won’t be pleased to see that Nvidia's Q4 fiscal 2019 revenues are projected to fall by 7.2% to reach $2.70 billion, based on our current Zacks Consensus Estimate. Meanwhile, the company’s full-year revenues are expected to climb 25.7% to hit $12.21 billion—NVDA’s fiscal 2018 revenues surged 41%.

Peeking ahead even further, the firm’s fiscal 2020 revenues are projected to climb just 4.3% above our current year estimate to reach $12.73 billion. Clearly, investors looking for massive top-line growth might move on from Nvidia based on these projections.

At the bottom end of the income statement, Nvidia is also expected to see its adjusted quarterly earnings sink 18% from the year-ago quarter. NVDA’s full-year earnings are projected to soar over 47%, but this growth estimate is based on bottom-line expansion from the previous three quarters. Maybe worse still, Nvidia’s fiscal 2020 EPS figure is projected to slip 1.9% below our current year estimate.

On top of that, Nvidia’s earnings estimate revisions have all trended in the wrong direction recently. 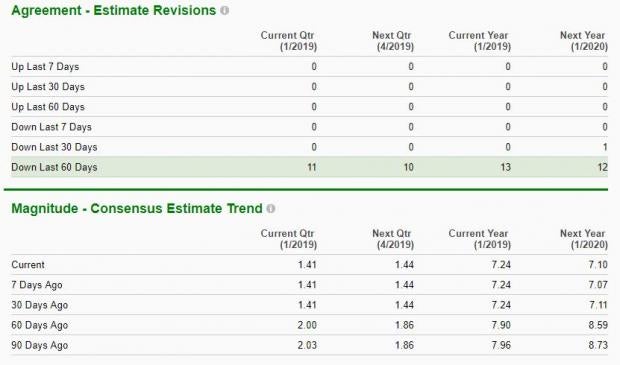 This could mean 2019 is set to be a down year for Nvidia stock. But let’s not forget that shares of NVDA do rest 50% below their 52-week high, which means the company could be in for a comeback based mostly on its perceived discount.

The greatest discovery in this century of biology is now at the flashpoint between theory and realization. Billions of dollars in research have poured into it. Companies are already generating revenue, and cures for a variety of deadly diseases are in the pipeline.

So are big potential profits for early investors. Zacks has released an updated Special Report that explains this breakthrough and names the best 3 stocks to ride it.

See them today for free >>